Luke Kornet is an American professional basketball player. Kornet currently plays for the Westchester Knicks after assignment from the New York Knicks of the National Basketball Association (NBA).

Kornet previously played for the Vanderbilt University team. But in 2017 NBA draft, Kornet remained undrafted so he joined the New York Knicks for the 2017 NBA Summer League. Kornet is currently dating his girlfriend and the couple got engaged in 9th June 2018.

Luke Kornet was born on 15th July 1995, in Lexington, Kentucky, United States. His parents are father Frank Kornet and mother Tracy Kornet. His father is a Vanderbilt as well as a former professional basketball player. He grew up along with his siblings, brother John Kornet and sister Nicole Kornet who played basketball at Oklahoma and UCLA. 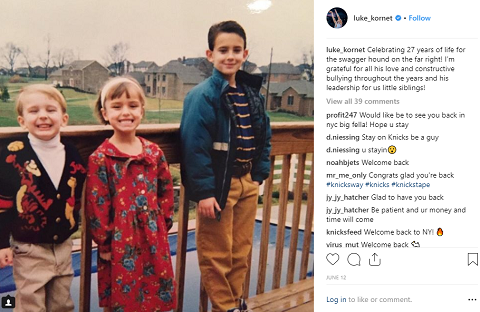 However, Kornet remained undrafted in the 2017 NBA draft. Later, he joined the New York Knicks for the 2017 NBA Summer League. Kornet signed a two-way contract with Knicks on 3rd July 2017. However, Kornet made his National Basketball Association debut on 8th February 2018, in a match against Toronto Raptors.

In the debut match, Kornet finished with a double-double, scoring 11 points and 10 rebounds. Moreover, he also became the first player in NBA history to sink 3 threes and have 4 blocks in a debut match. On 6th July 2018, Kornet signed a one-year standard contract with Knicks.

Luke Kornet is not married yet, however, he is currently dating his girlfriend. Although Kornet is dating, he hasn't revealed any identity of his girlfriend yet. Kornet and his partner began dating in 2015 and are still going strong in their relationship. 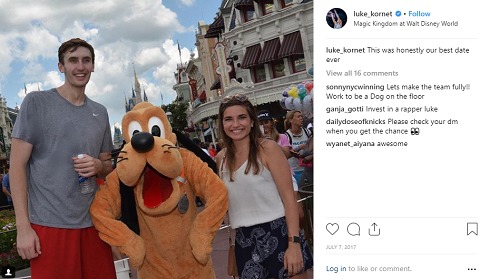 The couple engaged on 9th June 2018. Kornet shared an adorable photo on his Instagram where we can see him proposing his girlfriend. They often spend their time together and Kornet frequently shares photos of his partner on his Instagram. 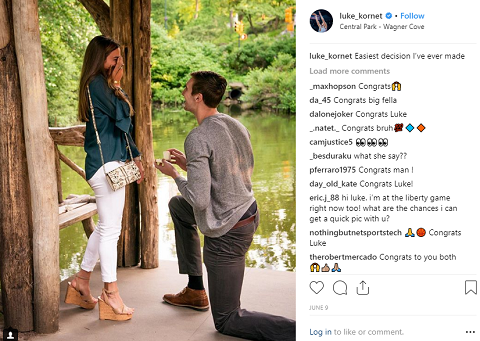 Although the lovebirds are already engaged, none of them have mentioned any plans of getting married. Other than this, there are no any records of Kornet's other affairs and relationships.

Luke Kornet Net worth and Salary

Luke Kornet earns a decent amount of money from his career as a basketball player. Currently, Kornet has an estimated net worth of around $2 million.