Lucian Bute is a Romanian-born Canadian retired boxer who competed professionally from 2003 to 2017. During his stint, he held the IBF super-middleweight (2007-2012), successfully winning nine consecutive defenses. For the reach, he was ranked No.1 in the division by The Ring magazine.

Compiling a pro record of 32 wins, with 25 coming inside the distance and 5 losses, Lucian Bute has earned a good deal of money through his 14 years long boxing career. As of 2021, his net worth is estimated at $5 million, build solely by his thrilling fights.

Reportedly, Lucian Bute made at least $1.2 million against Brian Magee In March 2011. Then he signed a three-fight exclusivity deal with Showtime for $6 million. On average, Bute made no less than the six-digit figure during his peak.

Lucian Bute tied the knot with his fiancee in June 2013. The duo has been in a relationship since 2006. It is to no less than 450 guests, and his parents still live in the village, as Lucian said, "Yes, I do!".  The festivities continued at the Hotel Viva Galati and the festivities lasted three days. 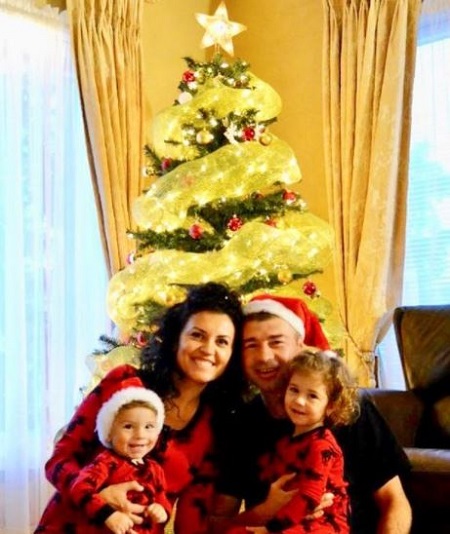 Lucian Bute with his wife and their two children SOURCE: Instagram @butelucian

On 3rd March 2017, the Bute couple welcomed their first child, a baby girl, Ema Anabella to the world. Further, their son, Eric Stefan Bute was born on 10th December 2018.

Lucian Bute fought for the Romanian national team as an amateur and later relocated to Montreal, Quebec, Canada, where he started boxing professionally.

On 22nd November 2003, he made his professional debut against Robert Muhammad at Bell Centre, Montreal, Quebec, Canada. He won the fight via TKO in round two. He next defeated Darin Johnson via TKO in round one. In the year 2005, he had four bouts, winning all via TKO.

On 26th May 2012, he faced his career's first loss against Carl Froch which cost him the IBF super-middleweight title. Rebounding from the loss, he made his come back on 3rd November 2012 where he won NABF light-heavyweight title against Denis Grachev. He started 2014 fighting against Jean Pascal where he lost via unanimous decision. Later that fight, he had 1 win and 3 losses.

On 21st March 2019, he retired from professional boxing, having not fought in over two years,