Lucas Tolentino Coelho de Lima, better known as Lucas Paqueta, is a Brazilian professional footballer signed to  Ligue 1 side Lyon. Also, he plays for his national side and has earned twenty-eight caps with six goals since 2018.

Besides, he is endorsed by Nike which earns him a decent sum of money. As of 2022, his net worth is $5 million.

Lucas Paqueta is married to Duda Fournier. They began dating in late 2017.

Duda wrote on Instagram, "Which sums up our relationship: GOD! And that explains it all!!! YEA! I said yes! With a heart that almost exploded with happiness! Thank you, thank you and a thousand times thank you to Him and to you Vidinha. I love you more than the world, my fiance." 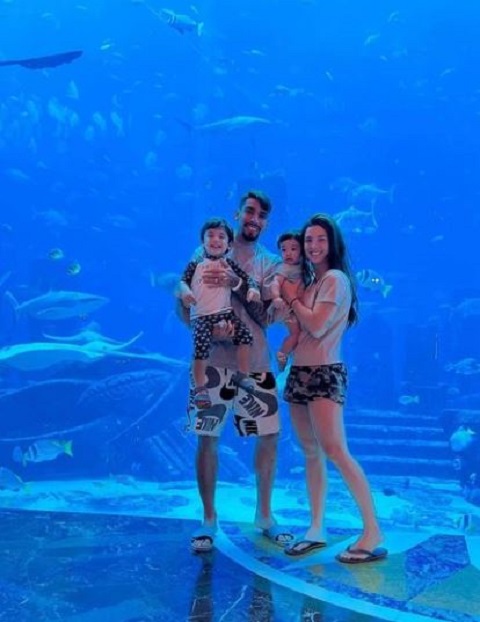 Lucas Paqueta with his wife and sons SOURCE: Instagram @lucaspaqueta

Paqueta and Fournier tied the knot in November 2018. They had a lavish wedding ceremony.

Lucas Paqueta is popular on Instagram with 4.8m followers.

Lucas is one of two sons born to the father, Marcelo and mother Cris. His brother, Matheus Paqueta (born 12 March 1995) is also a professional footballer. he is currently signed to Brazilian club  Uberlandia, on loan from Brazilian club Tombense.

Lucas Paqueta joined Flamengo at his 10 in 2007. By 15, he was technically skilled but did not have the physicality: his height was only 5 feet. By 18, he grew 10.6 inches more. He won the 2016 Copa Sao Paulo de Juniores with the Flamengo youth team.

In March 2016, Paqueta was promoted to Flamengo's senior squad and signed a contract extension until 2020. He debuted as a starter on 5th March 2016 in a 3-1 victory over Bangu in a 2016 Rio de Janeiro State League match.

His first goal for the club came on 19th Feburary 2017 in a 4-0 win over Madureira at the Estadio Raulino de Oliveira in Volta Redonda.

He was awarded the best Flamengo player in a game at the Copa Sudamericana final. He concluded the 2017 season, being the highlight of Flamengo.

On 4th January 2019, Milan announced signing Lucas for five years. On 12th January 2019, he made his Milan debut playing 85 minutes prior to being replaced by Fabio Borini as Milan defeated  Sampdoria 2–0 in extra time in the Coppa Italia. Later four days, he appeared in the 2018 Supercoppa Italiana, where  Juventus beat Milan 1–0.

On 21st January 2019, Lucas made his Serie A debut against Genoa in a 2-0 victory. His first goal for Milan came against  Cagliari in a 3-0 win, scoring the second which he dedicated for the victims of a fire at his old club Flamengo, all members of the under-15 team.

Lucas Paqueta was named one of the twelve alternatives for the Brazilian national team for Russia's 2018 FIFA World Cup.

On 7th September 2018, he made his international debut coming as a 71st minutes substitute for  Philippe Coutinho in a friendly match against the United States. His first goal for Brazil came on 23rd March 2019  in a 1–1 friendly draw against Panama.

Further, he was also on the Brazilian squad for the 2019 Copa American and 2021 Copa America. His national teammates are Alisson Becker, Thiago Silva, and Rodrygo.