Liam Rory Delap is an English professional footballer who is signed to the Premier League side Manchester City as a forward. At the international level, he has represented England U15 (2018), England U16 (2018-2019), and England U17 (2019).

Liam Rory is a new face to the football world. He has just started his football career professionally. Currently signed to Manchester City, his weekly wage is believed to be £10,000 i.e., £500,000 per annum. Kevin De Bruyne, Raheem Sterling, and Ilkay Gundogan are the team's highest-paid footballers. 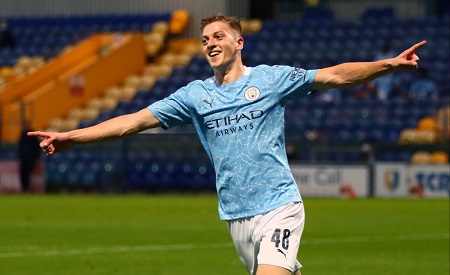 Furthermore, he is endorsed by Adidas. As of 2020, his net worth is under review.

The answer is NO. The 17-year-old Manchester City striker is currently much focused on his career rather than being in a romantic relationship yet. Already standing at well over six feet, Delap's Instagram page also does not hint any to his love life.

On 16th December 2013, Delap retired from football, making overall 504 appearances with 33 goals. Currently, he serves as a caretaker charge of Stoke City.

Besides, there is no information regarding Liam's academic background.

Derby County's youth product, Delap joined Manchester City's academy in 2019. On 24 September 2020, Delap was called up to the senior team. He made his first-team debut in a 2–1 home win against Bournemouth in the League Cup, scoring his first senior goal in the 18th minute. After the match, manager Pep Guardiola praised him and confirmed Delap would continue training with the senior team.

His premier league debut came on 27 September 2020, in a 2–5 home loss against Leicester, coming on as a substitute for Fernandinho in the 51st minute.