Raheem Shaquille Sterling celebrated as Raheem Sterling, is an English football player by profession who plays as winger, midfielder, and striker for Premier League club, Manchester City. Further, he helped Manchester City to win the premier league in 2018.

He has an estimated net worth of over $40 million, as of 2019. In addition, the young Forward player earns $200,00 as a weekly salary from Manchester City.

He was born to a Jamaican parent, Nadine Sterling, along with his 3 other siblings named Yakima Sterling, Kingston Sterling, and Kimberley Sterling. At the age of five, he emigrated to London with his mother. He attended Copland School in Wembley, North West London.

Raheem Sterling Salary and Net Worth

Raheem Sterling has an estimated net worth of around $40 million in 2018, including all of his properties and earnings. His net worth is $39 million lesser compared to Sergio Aguero.  He is currently receiving an annual salary of $9.5 million from his club. In addition, Raheem earns $200,00 as a weekly salary from Manchester City.

The Net Worth of Raheem Sterling has seen a hike of 120% over the past 3 years. His current market value price is recorded to be $92 million. As a rising football player, Raheem has got various sponsorships and endorsements. Nike is one of the most popular brands among the various brands endorsed by him.

As for driving, he owns a few of the best luxury cars in the world. Earlier he was having Mercedes Benz, BMW and Range Rover. Recently, he has got the lavish Audi, Ferrari, and Tesla The value of the Cars around $4.2 Million. He resides in Catford, London. The Value of his house around $2.2 Million which was bought House in 2011.

Further, Sterling also earns money from endorsement deals. He is a Nike athlete and often promotes its products.

Raheem was very enthusiastic about sports from a very young age, especially for football.  In 2003, he became the player member of Queens Park Rangers. Later in 2010, he was signed by Liverpool with an initial fee of $600,000.

In 2015, after a long contract dispute, he signed the contract with Manchester City in a transfer worth $66 million. He made his debut for Manchester City against Roma through an assist from David Silva. It is the highest transfer fee ever paid for an English player. He was also the player member for the national team of England at Under-16, Under-17, and Under-21. He represented the national football team in the 2014 FIFA World Cup.

The young talented player has achieved various awards and achievements throughout his careers such as Golden Boy Award (2014), Liverpool Young Player of the Year Award (2013-14 & 2014-15), UEFA Champions League Team of the Group Stage (2015) and many more.

Who is Raheem Sterling's Girlfriend?

Moving on to his personal life, he is neither married nor single but he is in a healthy relationship. He is dating a model named Paige Milian. The couple can often be spotted together spending their quality time with each other. They together have two children, a daughter and a son, Melody Rose Sterling  (2012), and Thiago Sterling (2017). 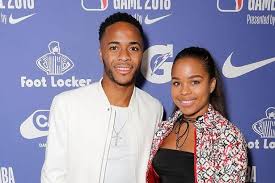 Apart from Paige, he was involved in many other affairs previously. Out of one of those affairs with a girl named Melissa Clarke, Raheem has a daughter Melody Rose. However, she is not his spouse.

Shaquille has gone through various hardships in his life before fame. He was just nine years old when his absent father was murdered in Jamaica. He and his mother have seen the most difficult times in their life when there was a time they were suffering from the massive case of poverty. As now, with hard work and talent, he is one of the most expensive players in England.

Raheem has been part of various rumors and controversies. He has been accused twice of assaulting the women; one of them was his former girlfriend. However, he was cleared of his charges both the time. He also came into a highlight for his picture where he was smoking a shisha pipe.

Good morning I just want to say , I am not normally the person to talk a lot but when I think I need my point to heard I will speak up. Regarding what was said at the Chelsea game as you can see by my reaction I just had to laugh because I don’t expect no better. For example you have two young players starting out there careers both play for the same team, both have done the right thing. Which is buy a new house for there mothers who have put in a lot of time and love into helping them get where they are, but look how the news papers get there message across for the young black player and then for the young white payer. I think this in unacceptable both innocent have not done a thing wrong but just by the way it has been worded. This young black kid is looked at in a bad light. Which helps fuel racism an aggressive behaviour, so for all the news papers that don’t understand why people are racist in this day and age all i have to say is have a second thought about fair publicity an give all players an equal chance.

In addition, Raheem has been a victim of racism for quite a few time. After a Premier League match against Chelsea, during which he stated that he was racially abused by a nearby fan. Sterling took the help of Instagram to express his concern about the vastly different treatment received by black players from certain sections of the media.

The 23-year- old forward posted a picture of himself training with his England teammates ahead of the 2018 World Cup with a clearly visible tattoo of an assault rifle on his right calf which was a matter of concern for anti-gun campaigners. 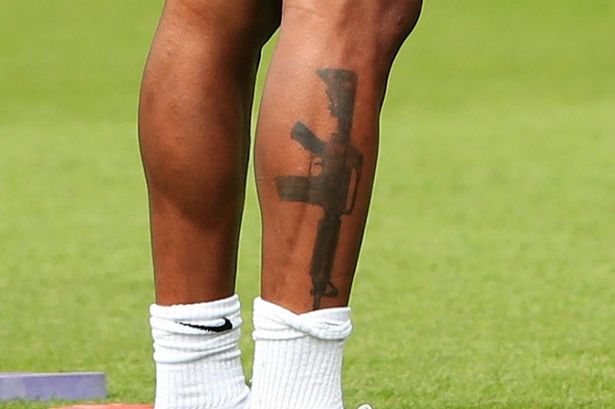 The attacker of Manchester City quickly explained the motivation behind the tattoo in social media. In an Instagram Stories post, Sterling wrote:

"When I was 2 my father died from being gunned down to death I made a promise to myself I would never touch a gun in my lifetime, I shoot with my right foot so it has a deeper meaning and still unfinished."