Leon Balogun is a professional German-born football player who plays for Nigeria National Football Team and Rangers as a defender wearing jersey no 14. Besides playing for several top German clubs like SV Werder Bremen, Hannover 96, and FSV Mainz 05, he has also represented Nigeria's native nation since 2014. He so far has appeared in 27 matches for Nigerian National Team and was inducted into the Nigerian National team for Fifa World 2018 in Russia.

The thirty years old is blessed with an adorable baby girl. Further, his net worth in 2022 is approximately $2 million.

Leon Balogun's Net worth and Salary

Leon Balogun has an estimated net worth of $2 million as of 2022, mostly earned through his football career. Balogun is signed with Rangers in the Scottish Premier League and earns £728,000 in the ongoing season of 2022. 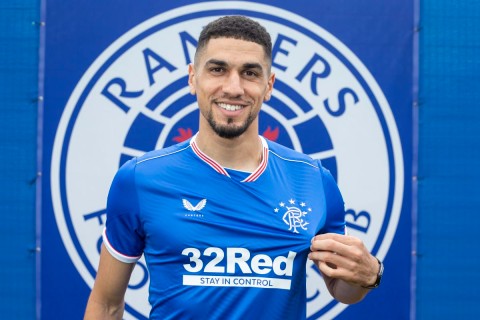 Leon signed with the Rangers in 2020 SOURCE: Rangers

Currently, 33, Balogun signed with Brighton & Hove Albion and earned him an annual salary of $1.508 million. But while he was with Mainz 05, his annual salary was estimated to be around $1.5 million as his weekly salary playing for the German club is reportedly around $30736.25. Leon primarily earns his income through his professional career as a football and is supported by various endorsements. His current market value is over $2.23 million.

Further, he has penned an endorsement deal with footwear company Adidas and is making a good sum as per the deal. He can be seen wearing Adidas shoes on and off the field.

In 2017, some sources claimed that he has a German girlfriend, but nothing regarding their marriage or relationship was confirmed. Furthermore, he has a daughter, but Leon has not revealed the identity of her daughter's mother.

He is a passionate footballer for both his club and the Nigerian team. Another fun fact about Leon Balogun is that he loves his family very much. 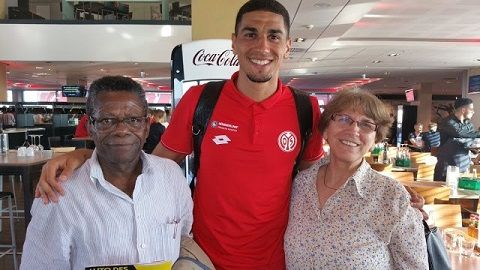 Leon Balogun with his mother and father SOURCE: Germania

In an interview, Balogun also revealed that he loves listening to Nigerian music, and Wizkid’s Ojuelegba is among some of his favorite tracks, including Tekno’s hit song Pana.

Leon Balogun was born to a Nigerian father, Cesar Balogun and a German mother, Orfa Balogun, on 28 June 1988 in West Berlin, West Germany. Balogun is of mixed ethnicity and is of German Nigerian descent. He also has a sibling sister.

Despite having Nigerian citizenship from his father's heritage, he was born and raised in Germany. The German-born defender was interested in football from his early days as a child and joined many youth-rank German local clubs like Hertha BSC and Hertha Zehlendorf in 2007.

Balogun began his senior professional career at the Turkish football club in Berlin Turkiyemspor Berlin and played during 2007/2008. He made 29 appearances and contributed four goals for the team.

After joining the reserve team of  Hannover 96 in 2008 and playing for junior levels, he made it to the senior team of Hannover, and after a handful of matches, he left the club in 2010 for the German club, SV Werder Bremen.

He joined Werder Bremen’s reserve team after impressing the club authority with his skills and outstanding play in the defensive position, and he was promoted to the senior team of SV Bremen. Balogun then signed up with the German second-tier club, Fortuna Dusseldorf, during the summer of 2012 and moved to SV Darmstadt 98 in 2014.

During his stint with the German second-tier club, he scored four goals in 21 matches for the team. The German-born Nigerian international player is currently tied in a deal with the Bundesliga club, 1. FSV Mainz 05, signed in 2015.

On 22nd May 2018, he penned a two-year contract with Brighton & Hove Albion. He debuted for Brighton & Hove Albion against Manchester United, replacing injured Lewis. Further, his first goal for the team came against Crystal Palace after being subbed to replace Pascal Grob due to a Shane Duffy red card for head-butting.

Even though he was qualified to play for Germany by his birthrights, he chose to represent Nigeria. He made his international debut for the Nigerian National football team against Mexico in a friendly match in 2014 as a replacement.

Leon sustained a foot injury during the match, but no surgery was required. After a long layoff from the injury, he played his second game in March 2015 in a loss against Uganda.

Balogun, along with players such as Victor Moses, Ahmed Musa, and  John Obi Mikel, were some of the prominent players that helped the African nation qualify for FIFA World Cup 2018 and is currently representing Nigeria in Russia Worldcup.