Matthew Landry Jones otherwise known as Landry Jones is an American football quarterback who is currently playing for the XFL side Dallas Renegades. Before has played for NFL team Pittsburgh Steelers (2013–2017), Jacksonville Jaguars (2018), and Oakland Raiders (2019).

Born on April 4, 1989, Jones played college football at Oklahoma and was drafted by the Steelers in the fourth round of the 2013 NFL Draft. Let's know the NFL QB's life event in his bio.

Landry Jones Net Worth in 2020; How much does he earn annually?

As of 2020, Jones is playing at the XFL side of the Dallas Renegades. According to the source, the average XFL salary for a player is $55,000, however top players can make more money. Further, Players receive $1,685 for every game they're active and $2,222 if they're on the winning team.

Before, he played six seasons in NFL amassing $5,264,205 as his NFL career earning. His contract with the NFL team are listed below:

Looking at his career earnings and salary, Landry Jones has an estimated net worth of $3 million as of 2020.

Landry Jones Personal Life; Who is he Married to?

Landry Jones is a married man. He tied the knot with his girlfriend, Whitney Hand-Jones, an Oklahoma Sooner women’s basketball guard in Fort Worth, Texas on July 6, 2012. Whitney was drafted by the San Antonio Stars in the 2013 WNBA draft in the third round with the 32nd overall pick. 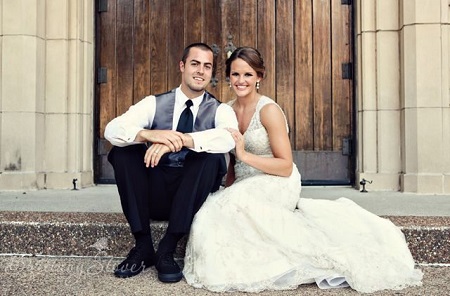 The couple doesn't have any children, but that doesn't mean they are having a problem in their love life as we here no rumors of any of these player's extra affairs. Further, they are often spotted together in the public and parties places now and again and they haven't outed any plans about having a baby or extending their family of two.

Jones was born on April 4, 1989, in Artesia, New Mexico, the United States to Kellye Jones (mother) and Kevin Jones (father). He is an American by his nationality and his ethnicity is white. His birth sign is Aries.

Growing up, Landry Jones went to Artesia High School in his hometown and played football there. While he was in his high school years, Landry led the Artesia High School team in winning two consecutive Class 4A state championships, throwing for a combined 7,013 yards and 89 touchdowns. He set several records and was later named New Mexico’s Class 4A Player of the Year.

After successfully completing his high school, Landry joined the University of Oklahoma and played for the Oklahoma Sooners from 2008 to 2012, for four years. When Landrey joined Sooners, as a third quarterback, the whole team was in trouble as Sooners' third-string quarterback Keith Nichol had transferred to Michigan State.

In 2009, Oklahoma Sooners' star QB Sam Bradford injured his shoulder in the season opener against Brigham Young, so Landry took over as the starting quarterback from the very second game. In Landry Jones' first game and Sooners' second game of the season, he completed 18-of-32 passes for 286 yards, with three touchdowns and an interception in the Sooners 64–0 win against Idaho State.

After Sam Bradford announced he would have season-ending surgery on his shoulder and would then be leaving early for the NFL draft, Landry Jones became the regular starter for the University team for the remaining three seasons of his college career. In 2010, he continued his starting job as Oklahoma’s quarterback and guided the team through its first four out-of-conference victories.

Landry announced on January 5, 2012, that he was returning to Oklahoma Sooners for his senior season. He led the Sooners to a 10–2 record overall in 2012 and finished the season with a completion percentage of 66 percent with 4,267 passing yards, 30 touchdowns, and 11 interceptions. Landry Jones finished his College football run with 16,646 passing yards and 123 touchdowns.

In 2013, Landry Jones was picked by The Pittsburgh Steelers in the fourth round as its 115th pick overall picks. Penning a four-year deal worth $2.59 million with a $439,220 signing bonus on June 12, 2013. The Steelers drafted him as their back up QB in replacement Charlie Batch and Byron Leftwich.

Prior to the 2015 NFL season, Jones was primarily the third-string quarterback behind longtime starting quarterback Ben Roethlisberger and backup Bruce Gradkowski.

In 2015's pre-season, Bruce Gradkowski got injured and missed the entire 2015 regular season so, Michael Vick to replace Gradkowski and Jones played as Vick's replacement and on October 18, 2015, during the Steelers' Week 6 game against the Arizona Cardinals, Jones made his NFL debut, replacing an injured Vick in the third quarter with the Steelers down 10–6.

He finished the game with 168 passing yards and two touchdowns to Martavis Bryant, as he led the Steelers to a 25–13 comeback win. After that, he played three consecutive seasons with Steelers.

Landry Jones' during his three-year playing career with Pittsburgh Steelers played a total of 18 games, and was a first choice quarterback in 5 games, with 108 passes, covering 1,310 yards and 8 touchdowns.

He is 30 years old and is 6 feet and 4 inches tall. The NFL Quarterback weighs around 101 kg. Let's take a look at Landry Jones related Facts.