Michael Vick is an American football coach for the American Football Alliance's Atlanta Legends and former quarterback who played 13 seasons in the National Football League, mainly with the Falcons of Atlanta and the Eagles of Philadelphia.

Is Michael Vick Married? His Family and Personal Life

Michael Vick has been married since 2012. He tied the knot with his sweetheart / Baller Wives star, Kijafa Frink on June 30, 2012, in Miami. The couple reportedly met in 2002 in a night club where they first exchanged their glances.

After he finished his prison time, Vick proposed Frink for marriage in 2009. He got down on one knee at her 29th birthday party and married after three years. 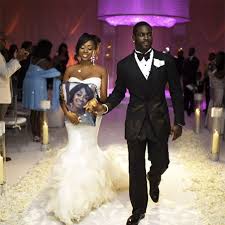 Michael and his wife SOURCE: essence

Some of the NFL stars like LeSean McCoy, Andy Reid, Plaxico Buress, Roddy White, and Aaron Brooks attended the ceremony.

Frink has been a supportive partner of the former star of Philadelphia right from the moment when Vick had trouble with the law. Kijafa was his girlfriend at the time and is said to have helped him pull through a lot of life stuff.

Happy Birthday my ??...Anything you want just say it and it’s done!.. Make a wish [email protected]

According to the sources, Frink is also a stepmother to the older son of Vick (Mitez Vick) who came from an earlier relationship. Before Vick came into contact with the reality star of the Baller Wives, he had a long-term relationship with Tameka Taylor as well as with Sonya Elliott, whom he dated from 2001 to 2002 for one year.

Besides this, Micheal spends quality time with his family and also takes the for trips for the refreshment and relaxation. Talking about his body measurements, he has a height of 1.83m and weight of 220lbs.

Michael Vick Net worth, Salary And Career Earnings Till 2019

Vick is one of the few athletes to sign a contract worth more than $100 million. Before his retirement, he had all those contracts over $100 million and had a great endorsement with the huge brand Nike but after his controversy, he lost it but again got it after a year.

According to the different sources and news portals, he has a net worth over $16 million. He reportedly earned $124,758,908 in his 15-year long career with the annual average salary of about $7 million in a year.

Peeking over his Instagram, we can definitely say that he is living his best life so he has a great amount of salary.

Micheal takes his family on lavish vacations and let them live to the fullest. Besides that, he has a great collection of expensive cars. Further, he has Rolls Royce, BMW, etc.

Athlete Michael Dwayne Vick was born in Newport News, Virginia, on June 26, 1980, to the parents Michael Boddie and Brenda Vick. Also, he has younger siblings but their identity has not been revealed yet. Additionally, he holds the nationality of America and has the racial background of the African. Further, his zodiac sign is Cancer.

Vick showed an early talent for the game like his father, who gave him his first football at the age of three. Vick grew up near the coach of the football team at Warwick High School, Tommy Reamon, a former star of the World Football League.

At Homer L. Ferguson High School in Newport News, Vick first came to prominence. He impressed many as a freshman with his athletic ability; that year he threw in a game for over 400 yards. Vick scored three rushing touchdowns in just over a quarter of play in his first college game as a redshirt freshman against James Madison in 1999.

Vick ran the 40-yard dash in 4.33 seconds during his Pro Day workout; his time was clocked as low as 4.25, which is the fastest-ever quarterback for an NFL. He signed a contract worth $62 million for six years. On September 9, 2001, Vick made his NFL debut with the San Francisco 49ers and saw limited action.

After the season, after leading Atlanta to their third division title, Vick, whose single-season rushing total was the third-highest for a quarterback in NFL history, was named his second Pro Bowl. On December 23, 2004, he signed an extension of $130 million for nine years.

In August 2007, hours after Vick in the Bad Newz Kennels dog fighting investigation pleaded guilty to federal charges, the NFL suspended him indefinitely without pay for violating his player behavior policy. NFL commissioner Roger Goodell said in a letter to Vick that the quarterback had admitted conduct that was "not only illegal but also cruel and reprehensible."

At a press conference on August 27, Falcons owner Arthur Blank said the Falcons would try to recover a portion of the signing bonus from Vick. He said the team had no plans to cut ties with Vick immediately, citing salary-cap problems.

The Falcons sent a letter to Vick on August 29 calling for him to reimburse them for his $37 million bonus of $20 million. The case was sent to arbitration, and an arbitrator ruled on October 10 that Vick had to pay $19.97 million to the Falcons. The arbitrator agreed with the claim of the Falcons that when he signed his new contract in 2004, Vick knew he was engaged in illegal activity and that he had used the bonus money to pay for the operation.

Vick was mentored by former Indianapolis Colts coach Tony Dungy after his release from jail. As his suspension and incarceration continued, the prospect of his return to professional football was the subject of much conjecture. In 2007, John Clayton of ESPN said that few general managers were strong enough to consider taking a chance on Vick, and even then most NFL owners would be concerned about a fan and media backlash.

On August 13, 2009, Vick signed a one-year contract with the Philadelphia Eagles. The contract amounted to $1.6 million, with no guaranteed money. It included a $5 million team option for the 2010 season. On March 21, 2014, the same day that the Jets released Mark Sanchez, Vick signed a one-year $ 5 million contract with the New York Jets. One week later, the Eagles signed up to Sanchez.

Vick announced in 2016 that he would be playing in the NFL for another season. However, he officially announced his retirement from professional football on February 3, 2017, after not signing with a team all season. Vick retired as an Atlanta Falcon on June 12, 2017.

Vick joined his former coach Andy Reid as a coaching intern with the Kansas City Chiefs during their 2017 training camp after expressing his previous interest in coaching. Vick finally left the role on Fox NFL Kickoff on FS1 to become an NFL analyst.