Kylian Mbappe is a French professional football player currently playing as a forward for Paris Saint-Germain and the France National Team. The 23 years old professional is regarded as one of the best young players.

Mbappe is currently receiving an annual salary of over $20 million from his present club in League 1, which has boosted his net worth to $100 million in 2022. He has played for clubs like Monaco and Paris Saint-Germain.

How Much Is Kylian Mbappe's Net Worth In 2022? Know His Salary and Endorsements

Kylian Mbappe has an estimated net worth of over $100 million in 2022, including all of his properties and incomes. His current annual salary from Paris Saint-Germain is reported to be $20 million plus bonuses.

In, he received an annual salary of $2.3 million from his former club.

Besides, the world's highest-paid athlete earns $4 million from endorsement. Until recently, he only had one sponsor, Nike. Further, he signed a major endorsement deal with luxury watch brand Hublot in October 2018.

He replaced legendary Usain Bolt to gain the title of Hublot’s brand ambassador. The deal was reported to cost $1.13 million per annum. With Mbappé joining forces with Hublot, his sponsor count has become two. 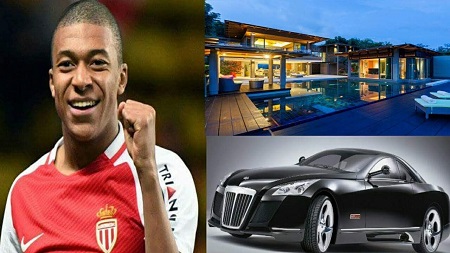 Mbappe owns a few lists of expensive cars, including Ferrari, Mercedes-Benz, Audi, BMW, and a Range Rover. The total worth of Mbappe’s cars is expected to be around $890,000. He had previously bought a house near Monaco's training ground.

Personal Life of Kylian Mbappe; Who is he dating currently?

Currently, 23, Kylian Mbappe seems to be dating Miss France 2017, Alicia Aylies. Currently 23, Alicia is on the French Island of Martinique and studied law at a university in French Guiana. The couple was first speculated to be dating each other after the model joined French WAGS at the FIFA World Cup 2018. However, There have been several rumors of the player dating several girls in recent days including Rose Bertram and Ines Rau. 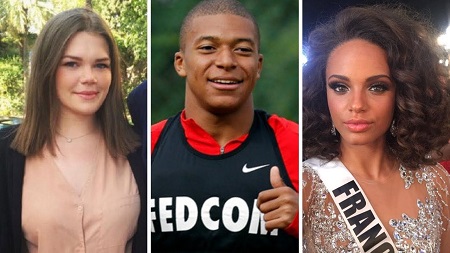 Earlier, Mbappe was rumored to be dating Camille Gottlieb, the daughter of Princess Stephanie of Monaco. Camille first saw him at an event in Prince's palace and was believed to have fallen for him. However, it is yet to be confirmed.

Besides this, his father is from Cameroon, a football coach, and his agent as well, while his Algerian mother, Fayza, is a former handball player. His adopted brother Jires Kembo Ekoko is also a professional football player.

A native of Paris, France, Kylian Mbappe was born as Kylian Sanmi Mbappe Lottin on 20 December 1998, to his parents Fayza Mbappe and Wilfried Mbappe. He was raised in Bondy, France, along with his brothers Ethan Mbappe and Jirès Kembo Ekoko.

He holds French citizenship and belongs to mixed ethnicity when talking about his nationality. His star's sign is Sagittarius.

Mbappe began his youth career at AS Bondy, coached by his father Wilfried, at the age of 7.

Kylian Mbappe began his professional footballing career in 2015 after being promoted from the youth system of Monaco. He made his professional club debut on 2 December 2015, against SM Caen. He then became Monaco's youngest-ever first-team player, aged 16 years 347 days and breaking Thierry Henry's record.

His first goal for the club came on 20 February 2016, in a 3–1 home Ligue 1 win over Troyes. He signed his first professional contract, a three-year deal, on 20 February 2016. After two seasons with the club, he was sent on a loan to the league's fellow side PSG.

He made his official transfer move to the French Giants on 31 August 2017, with an option to buy for $166 million, making him the second most expensive player, only behind teammate Neymar. He made his dream debut for the club on 8 September 2017, scoring a goal in a 5–1 Ligue 1 win at Metz. His trio with Neymar and Cavani is regarded as one of the top trios in football at current.

Rumors of Kylian joining Real Madrid were high in the market, but it's almost settled as some suggest that, He has agreed to extend his contract with PSG for the next two seasons.

Kylian Mbappe has represented his national team in both junior and senior levels at several tournaments. He won the 2016 UEFA European Under-19 Championship, scoring five times for France.

His senior international debut for France came on 25 March 2017, coming on for Dimitri Payet in the 2018 FIFA World Cup qualification. His debut international goal came on 31 August 2017, in a match against the Netherlands. He has won 33 caps for his national side scoring 13 goals.