Kurt Werner is a former professional American football quarterback who played in the National Football League for 12 seasons, for teams like the St. Louis Rams, Green Bay Packers, Amsterdam Admirals, Iowa Barnstormers, New York Giants, and the Arizona Cardinals. Reportedly, he is the quarterback coach at Brophy College Preparatory since 2019.

He is considered one of the best undrafted NFL players of all time and is well-known for his leadership skills. Kurt has won NFL MVP, Super Bowl XXXIV MVP, 2008 Walter Payton Man of the Year award, and is the four-time Pro Bowler.

Kurt Warner met his future wife Brenda Warner while he was cut from the Packers' training camp in 1994. The couple dated for years before getting married in 1997. The marriage ceremony was held on October 11, 1997, at the St. John American Lutheran Church. 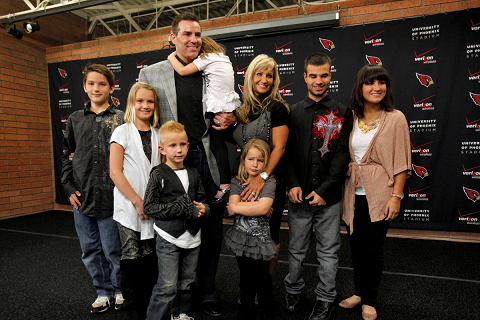 Kurt with his wife and children SOURCE: FanBuzz

Warner's wife Brenda is a former United States Marine Corps corporal. She has two children from her previous relationship who were adopted officially by Kurt. The couple further had five children of their own. The family resides in Lowa.

Kurt Warner Earnings and Net Worth

The 50 years old former professional has had high earnings throughout his career which has added to his net worth. As of 2022, Kurt has an estimated net worth of $30 million including his career earnings and salary. 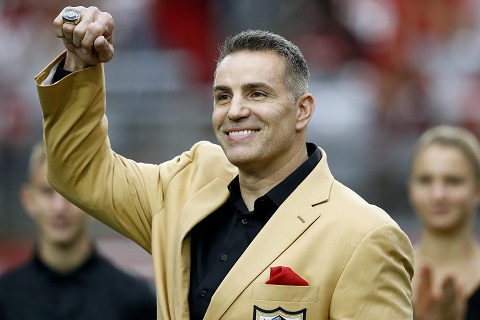 He further had some earnings while working as an analyst in the NFL Network. Warner established First Things First, a charity that helps those in need in 2001 with his wife Brenda.

Kurt Werner was born as Kurt Eugene Warner on 22 June 1971, in Burlington, Iowa, the United States. His parents Gene and Sue Warner got divorced when Warner was just four. He and his older brother, Matt, lived with his mother.

Kurt attended Regis High School in Cedar Rapids excelling in basketball, baseball, and football graduating in 1989. He then joined the University of Northern Iowa, graduating in 1993.

Despite his senior season success, he remained undrafted in 1994, while he was invited by the Green Bay Packers to training camp, but they cut him just a month after the signing. A year later he began to play for the Iowa Barnstormers of the Arena Football League. Catching the attention of the Rams, he was sent overseas to play in the NFL's European league in 1998.

Having an injury, he ended his times with the Rams in 2003. He further signed a one-year deal with the New York Giants, who traded him for rookie Eli Manning that spring. After a season with the club, he then signed a four-year deal with the Arizona Cardinals in March 2005. 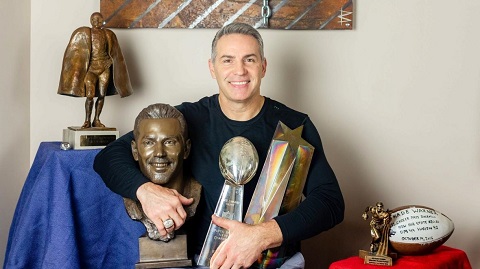 CAPTION: Kurt with his Awards SOURCE: The Times

He began to start duties with Matt Leinart, the former USC standout. After a season with NY Giants, he further moved to Arizona Cardinals. After four successive seasons with the Cardinals, he ended his football career in 2010. Kurt further joined NFL Network as an analyst and he was inducted into the Pro Football Hall of Fame in 2017.