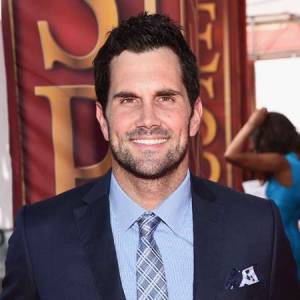 Matt Leinart is a former American football quarterback who currently works as a studio analyst for Fox Sports' college football coverage. During his collegiate year, he played for the University of Southern California. He won the Heisman Trophy in his junior years.

Leinart went professional in the NFL in 2006 and played for the clubs Houston Texans, Oakland Raiders and Buffalo Bills. He started to work as a Studio Analyst for Pac-12 Network in August 2014.

Matt Leinart was born on May 11, 1983, in Santa Ana, California as Matthew Stephen Leinart. He had strabismus commonly known as cross eyes in his younger year and underwent surgery to correct the problem. He attended Mater Dei High School and played for the high school football team. He won the Gatorade California high school football Player of the Year.

After graduating high school, Leinart joined the University of Southern California, for further education. He played for the USC football team under coach Paul Hackett. Paul Hackett was later fired and his seat was filled by coach Pete Carroll. Leinart redshirted the 2001 season and understudied senior quarterback Carson Palmer who went on to win the Heisman Trophy.

In 2004, Matt Leinart was invited to the Heisman Ceremony along with teammate Reggie Bush, and Adrian Peterson. In the close competitive Heisman race, Leinart claimed the trophy becoming the sixth USC player to do so. At the end of his college career, he had 807 completions on 1,245 attempts for 10,693 yards, 99 touchdowns, and 23 interceptions.

In the 2006 NFL Draft, Matt Leinart's name was drafted and was picked by the Arizona Cardinals in the first round with the tenth overall pick. He played four seasons with the Cardinals. He agreed to a six-year, $51 million contracts with the team in his first season.

Leinart set an NFL rookie record with 405 passing yards. He had the quarterback ratings of 74 in November of his first season. He was the starting quarterback for the 2007 season. However, he fractured his left collarbone after he got sacked by St. Louis Rams linebacker Will Witherspoon and was placed on injured reserve. His season had ended due to the injury.

Recovering from injuries, Matt Leinart played in the 2008 offseason as a starting quarterback. He was unable to perform well and was replaced by Kurt Warner. Warner became the starter for 16 games and took Cardinals to their first Super Bowl while Leinart only saw limited action. Leinart was kept as a backup quarterback for the 2009 season as well.

There was speculation of Leinart becoming the starter in the 2010 season after Warner's retirement. But, due to underperformance from Leinart in training camp resulted in the starting position to be handed to Derek Anderson. He was released in September of 2010 in favor of Anderson, Max Hall, and John Skelton.

After Cardinals released him, Leinart signed a one-year contract with the Houston Texans as a back up for Matt  Schaub. Matt played 16 games of the 2010 season and Leinart was unable to get any action during the entire season. He returned to Houston as a backup for the 2011 season.

Matt suffered from an injury to his right foot in week 10 of the 2011 season which gave Leinart the chance to play in matches. However, he fractured his collarbone and was unable to continue the season. In his place came the rookie quarterback T.J. Yates. Leinart was released by the Texans on March 12, 2012.

Matt Leinart was picked by the Oakland Raiders on May 1, 2012, as a back-up for his former college teammate, Carson Palmer. He was not re-signed by the raiders during the offseason. The Buffalo Bills signed Leinart on August 25, 2013, and was released by the team on August 30, 2013. That was the end of Leinart's career as a professional footballer and he turned to studio analyst soon after.

Matt Leinart's net worth is estimated to be $16 million. As a professional NFL player, he did make a majority of his money. Since, he his retirement from the sport, he works as a studio analyst and is the primary source of his income. His salary as a studio analyst has not been disclosed.