If you love watching Olympics then, Kolohe Andino must not be a new name. Kolohe is a rising American surfer. Andino holds the record for winning the most national Scholastic Surfing Association titles. Also, He is the youngest to win a title at the age of fifteen. Kolohe is representing the United States in the 2020 Summer Olympics in Surfing.

Kolohe Andino was born on March 2, 1994, in San Clemente, California. He is the son of Dino Andino and his wife. His father is also a well-known former American surfer. Andino believes his father is the most significant source of inspiration in his life to date. Kolohe stands five feet and eleven inches tall and weighs 73 kg.

Kolohe Andino's Net Worth in Million

Kolohe Andino has an estimated net worth of more than $1 Million. He has accumulated most of his net worth through surfing events globally, and a handsome amount through his sponsorship and advertising deals with numerous top brands. Red Bull remains one of the biggest sponsors, along with Hurley, FC, Mayhem, and Oakley. 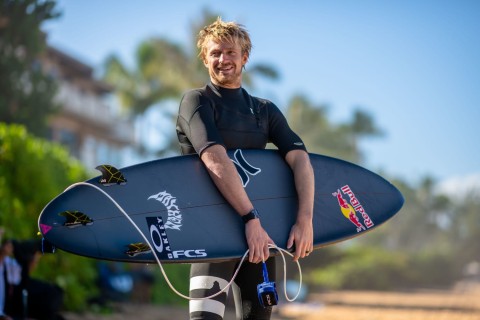 Kolohe is very much private in terms of his economic background. He has not shared a word about his earnings, salary, and prize money from the events. As per sources, A professional surfer makes more than $500,000 annually.

Who is Kolohe Andino Dating? Know About His Girlfriend, Wife, and Relationship Status

Kolohe is an active social media user. Although He does not share a word about his personal life in the media, His timeline depicts most of his life. Andino is married to his longtime girlfriend, Madison Aldrich. The love birds had a private and beautiful wedding ceremony in San Clemaneta, California, on January 7, 2018. They had been dating each other for several years before tying their wedding knot. 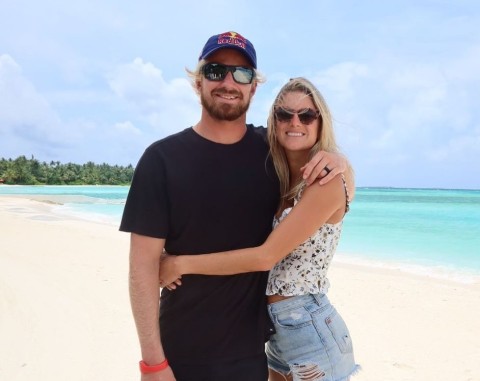 Kolohe is married to Madison for more than three years SOURCE: [email protected]

Kolohe and Madison are expecting their first child soon. The American surfer posted the gender-revealing video on May 30 and is expecting a baby girl. The duo loves hiking to different places and spends a lot of their free time with family and friends.

Kolohe started surfing from a very early age. Andino followed his father's successful footsteps and has gained his name and fame. When He was merely the age of eight, Many sponsors tried to sign him and represent the brand. Kolohe got a chance to train under Mike Parsons as his coach at the age of fifteen.

Kolohe won the National Scholastic Surfing Association title at the age of fifteen, becoming the youngest competitor to win the title. The same year, He won two USA Surfing championship titles at the Lower Trestles in the Under 16 and 18 competitions. Andino made his international headlines after winning the ASP-6 Star Quicksilver Brazil Open and the Vans Pier Classic World Tour event. In 2015, Kolohe won his first-ever World Surf League title held at Huntington Beach, California.

Andino made it to the 2020 Summer Olympics for surfing when he finished as one of the top two Americans at the 2019 World Surf League. Kolohe became the first U.S. surfer ever to have qualified for the Olympic games. He got eliminated in the quarterfinals by Kanoa Igarashi.