A South Korean footballer, Kim Young-Gwon currently plays in the J1 League for Gamba Osaka. Earlier, he played for the Chinese Super League side Guangzhou Evergrande. He made his football career debut with  FC Tokyo in 2010 and later a year switched to Omiya Ardija, where he remained until 2012.

A South Korea international since 2010, he has been capped 94 times with three global goals. Also, he has represented South Korea U-20 and U-23 national teams.

Kim Young-Gwon is a native of Jeonju, South Korea, born on February 27, 1990, to Kim Sung-Tae. His star sign is Pisces. By nationality, he is a South Korean and belongs to the Asian ethnicity.

Upon his high school graduation, Kim enrolled at Jeonju University, where he initially began his football career with the University team.

Kim Young-Gwon's Net Worth and Salary

Kim's current market value was recorded at €850,000, while in 2014, his market price was €1.5 million, indicating a massive decline in his market value. His current net worth and salary are under review. 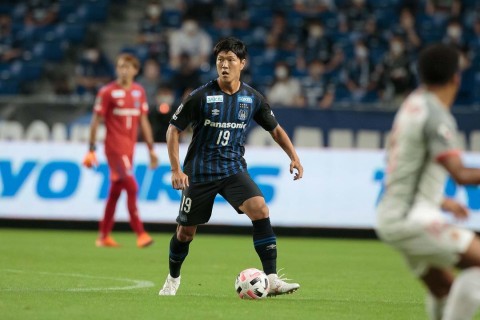 Playing for K League, Kim reportedly earns around 100 Millian Yen, i.e., approximately $1 million, while the average annual salary of the league is reported to be 70,000,000 Yen.

In January 2010, Kim signed to J1 League side FC Tokyo, making his professional debut on March 20 against Gamba Osaka. His first goal for the FC Tokyo came on June 6, in the 2010 J. League Cup against Kyoto Sanga FC. In his first season at the club, he played 23 league matches. However, the club was relegated to the second tier by finishing 16th place in the league.

On December 31, 2010, Kim was transferred to Omiya Ardija. He remained two seasons with the club, playing 40 matches.

On July 2, 2012, Kim penned a four-year to Chinese Super League side Guangzhou Evergrande for a reported transfer fee of $2.5 million. On August 22, he made his debut for Guangzhou Evergrande in the first match of the 2012 Chinese FA Cup semifinals. The game ended in a 1–0 win at Tianhe Stadium. Later three days, he made his Chinese League debut in a goalless draw with Tianjin Teda.

After his contract expired in 2016, Kim extended his contract until 2018. After the termination of the agreement, He moved to Japan and signed with Gamba Osaka. He remained with the club until 2018. In the six seasons, The player appeared in ninety-one games and scored three goals.

In his first season with Gamba Osaka, The player appeared in thirty-six matches and scored one goal. He remained with the club for three seasons and then moved to Ulsan Hyundai in K League.

In July 2010, Kim earned his first call-up to the South Korea national football team, making his international debut on August 11 in a friendly match against Nigeria. His first international goal for his country came on June 3, 2011, in an international friendly against Serbia.

More, he has represented his national side in the 2014 FIFA World Cup and 2015 AFC Asian Cup. In May 2018, Kim was named in South Korea's final 23-man squad for the 2018 FIFA World along with his teammates Son Heung-min, Hwang Hee-chan, and Park Joo-ho.

Since the 2018 World Cup, Kim has appeared in more than thirty international games and is among the candidate for the 2022 World Cup.

Who is Kim Young-Gwon's Wife?

Along with a successful professional life, Young-gown is blessed with an excellent personal stature. In 2014, he tied the knot with his long-time girlfriend, Park Se-jin in December 2014. His wife, Park, is a model and has been featured in various magazines, including Bling, Allure, High Cut, Boggle, and many more. 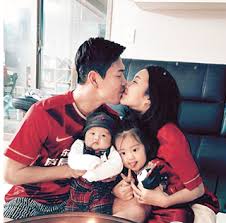 The couple is blessed with three adorable children. The duo is the proud parents of two sons and a daughter. Both parents are active social media users and keep sharing each other's photos on their timelines.

Currently thirty-two years, Young-Gwon stands six feet one inch tall and weighs 74 Kg. Kim is active on Instagram with 68.6k followers. He often shares his family photo on his Instagram.