An international soccer player Kim Seung-Gyu currently plays as a goalkeeper for the South Korea national football team and the Saudi Arabian professional football club, Al-Shabab. His annual salary is €208,000, and he earns around €4K weekly.

Kim Seung-Gyu was born in Ulsan, South Korea, on September 30, 1990. He was born in Korea, which grants him South Korean nationality, and he belongs to the Asian race. His father's name is Kim Gwangju. 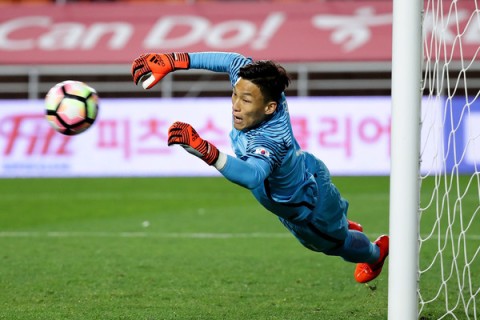 Although it is hard to assume his net worth, the talented footballer must make good money. His net worth, therefore, is subject to increase shortly as he is doing good in his career. A football player has multiple sources of income, including sponsorship and advertising deals. He spent his early days in his home country club and moved to Saudi Arabia.

Kim Seung-Gyu began his career as a youth player at Ulsan Hyundai in 2003. He remained for four years for the youth squad. He was promoted to the primary team in 2006 and debuted in K League in 2008. He was named the K League Classic best Xi 2013 squad for his brilliant performance 2013.

On January 5, 2016, Seung-Gyu was transferred to Vissel Kobe, while his market value was estimated to be around £900K. He has so far played 34 games. He was a team member that won the 2012 AFC Champions League.

In 2007, Seung-gyu made his international debut in the U17 squad of South Korea, where he played 17 games. Following that, he played 16 games for U-20 and 15 for U-23. On August 14,  2013, Seung-gyu earned his first senior cap against Peru in an international friendly, keeping a clean sheet in his debut.

Kim Seung-gyu was named the second choice goalkeeper behind Jung Sung-long for the FIFA Worldcup 2014 and played against Belgium after Ryong's poor performance.

Afterward, Gyu became the first-choice goalkeeper for the South Korean national football team. He was selected for the FIFA World Cup 2018 in Russia as a starter eleven along with Ki Sung-Yeung, Son Heung-min, and Kim Shin-Wook.

Gyu was a member of the U23 squad that won the 2014 Asian Games. Moreover, he won the 2015 EAFF East Asian Cup along with his senior team in South Korea.

Career and Journey to Saudi Arabia

Kim started his professional career with Ulsan Hyundai in 2008 and trained with its youth academy from 2003 until 2008. For years, The player represented the club in numerous divisions and won several youth accolades. He signed his first major contract with the club for an undisclosed fee and time. Over a few years, The player appeared in 114 games until 2015.

In the 2016 season, Kim moved to the Vissel Kobe in the J1 League. He signed a four-year contract with the club and had a record appearance of thirty-four in the first year. He won the Korean FA Fans Goalkeeper of the Year Award in the same year. At the end of his contract, The player moved to Ulsan Hyundai, played for a season, and earned the EAFF Championship Best Goalkeeper Award.

Kim moved to Kashiwa Reysol in the early 2020 season and remained an integral keeper for the rest of the season. The same year, He was part of the J.League Cup runner-up team. After his contract expired in 2022, The player moved to Saudi Arabia and joined Al-Shabab. He has just appeared in one game.

Kim Seung-gyu is a happily married man and blessed with an adorable son. He is a private person who keeps his personal life away from the limelight.