Kimberley Duane Mulkey a.k.a. Kim Mulkey is the head women's basketball coach at Louisiana State University in NCAA Division I. She is the first person in NCAA women's basketball history to win a national championship as a player, assistant coach, and head coach. She mentored Baylor in winning three NCAA championships in 2005, 2012, and 2019.

Mulkey was born on May 17, 1962, in Santa Ana, California. Her father, Leslie is an ex-Marine and an exterminator while her mother, Dru managed a doctor's office and ran a beauty shop.

In April 2021, KWTK revealed the term sheet between Kim Mulkey and Louisiana State University. As per the accord, the former Louisiana Tech point guard's contract with LSU runs through the 2028-29 season and has an annual base salary of $400,000. KWTK adds supplemental pay raises Mulkey's salary to $2.505 million starting from the 2021-22 season. 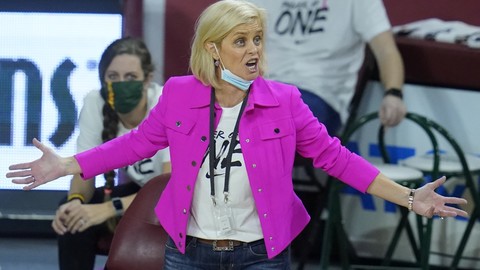 Her salary at LSU is expected to pike every year to about $3.3million. She is also entitled to performance-based incentives, which include $65,000 for a Southeastern Conference regular-season championship, $150,000 for a national title, and $15,000 if LSU finishes in the top 10. Should LSU choose to fire her with no cause before June 30, 2022, Mulkey will be owed $2.5million or will receive a $2million buyout if the University fires her without reasons after the date.

Who Is Kim Mulkey's Married To? Personal Life

Mulkey married former Louisiana Tech Bulldog's quarterback, Randy Robertson in 1987. Their relationship lasted for 19 years before officially splitting up in 2006. They were even alleged of seeking a marriage counselor before the divorce.

She had met Robertson during her time at the Louisiana Tech University. Mulkey's marriage with the football star produced two children, son Kramer, and daughter Mackenzie. The former is a professional baseball player and collegiate All American at Louisiana State University while the latter played both basketball and softball for Baylor and is now an assistant coach on her mother's staff. 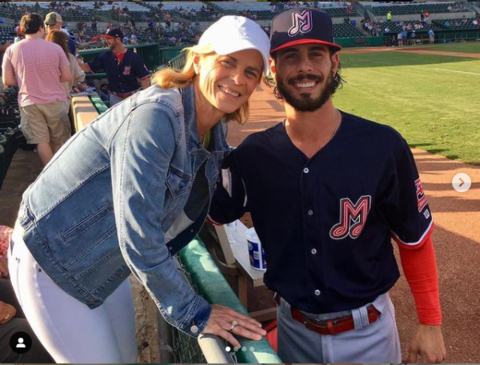 For some undisclosed reason, Californian-born coach and her father didn't speak to each other for 25 years and didn't attend Mulkey's wedding with Robertson, either.

The future Women's Basketball Hall of Fame was one of the first girls in the US to play organized baseball with boys. She led Hammond High School basketball team to four consecutive state championships. She went on win two national championships as a player at Louisiana Tech University -- the AIAW title in 1981 and the NCAA title in 1982. She was the inaugural winner of the women's version of the Frances Pomeroy Naismith Award. She was promoted as the head coach of Tech in 1996. 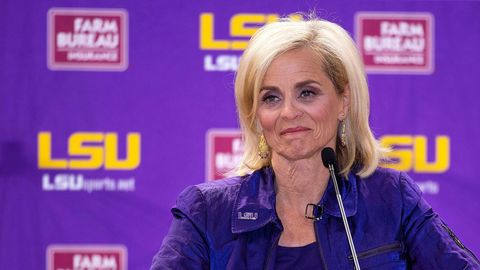 Kim Mulkey is the head coach of the women basketball team at the Louisiana State University SOURCE: Dallas Morning News

During her reign as an assistant coach, Lady Techsters posted a 430-68 record and also won the 1988 NCAA Championship. As a player at the 1983 Pan American Games, she led the team USA to earn the gold medal for the event while she herself averaged 12.4 points per game.

Mulkey averaged 5.3 points per game en route to US gold medal victory at the 1984 Olympics. In her first season at Baylor (arrival 2001), Mulkey led the team to its first-ever NCAA tournament bid. Since she was appointed the head coach, the Lady Bears have gone to every postseason play, winning 20 games each year.

Mulkey became the first woman, as a player and the coach, to win the NCAA Division I title when she led the Baylors to the 2005 championship title. Additionally, this made her the fourth person to do so (after Joe B. Hall, Bob Knight, and Dean Smith).

She is also credited for leading the Lady Bears to the 2012 NCAA Championship title with a perfect 40-0 season, the most wins in college basketball history, men or women. Under her tutelage, the Lady Bears won yet another NCAA Division I championship in 2019.

This made Kim the third manager to win three or more NCAA Division I women's basketball championship, along with Geno Auriemma and Pat Summit. In the midst of the 2020 global pandemic, she pulled in several criticisms with her suggestion of not testing the college players for Covid 19. She herself had tested positive for the virus at the beginning of the 2020-21 season.

On April 25, Mulkey was announced as head coach at Louisiana State University.