Geno Auriemma is a well-known American college basketball coach. He has been working as the head coach of the University of Connecticut Huskies Women's basketball team since 1985 and is among the most prolonged period to coach for a single team. Geno holds the record for leading UConn to eleven NCAA Division I national championships, the most in women's college basketball history.

Geno Auriemma was born Luigi "Geno" Auriemma on Match 23, 1954, in Montella, Italy. He is among the three children born to Donato Auriemma and his wife, Marseille Auriemma. He has a brother named Ferrucio and a sister named Anna Auriemma. When Geno was seven years old, his father immigrated to Norristown, Pennsylvania, where he spent most of his childhood. After graduating from High School, he enrolled at the West Chester University of Pennsylvania in 1973.

How Rich is Geno Aureimma? Know About His Net Worth, Salary, and Earnings

Geno has been working as the head coach for more than thirty-six years. He is ranked among the highest-earning coach in the United States. Auriemma has an estimated net worth of $10 Million. He has an annual salary of $2.7 Million. In 2017, the University of Connecticut signed a new five-year agreement scheduled to pay him $13 million. 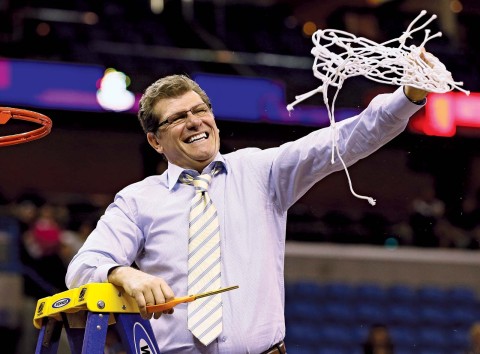 Auriemma's contract includes $2.4 Million as his base salary, and the new agreement gave Auriemma a $230,000 raise compared to what he made last season and $120,000 more than he had made in 2016. In 2018, he was listed among the highest-paid civilian of the state. Kellie Harper is the highest-paid female coach in the WNBA. In 2013, Geno had signed a $10.9 Million contract with his Univesity for five years.

Father of Three Children; Who is his Wife?

Geno tied his wedding knot with his longtime girlfriend, Kathy Auriemma, in 1978 at a private wedding ceremony. The love birds have been married for more than forty years. They are yet to share much about their wedding information with the public. From this happy marriage life, Geno and Kathy are the proud parents of three children, Jenna Auriemma, Michael Auriemma, and Alyssa Auriemma.

It's been more than forty years of his marriage, but there have been no rumors of the couple having ups and downs in their marriage life. He is very much private about his personal life with the public.

Career as a Head Coach

Auriemma started working as an assistant coach for Saint Joseph University in 1978. He moved to Bishop Kenrick HS in 1979 and worked there for two years. Geno signed with Virginia in 1981 and remained with the team until 1985. In 1985, Connecticut hired him as their head coach and had not changed ever since.

Geno has won more than four dozens of honors and Awards in his basketball career. He has won WBCA National Coach of the Year for a record seven times. His team has won eleven NCAA Division I Tournament. The head coach was inducted into the Basketball Hall of Fame in 2006.

Geno also has worked with the Women's National basketball team. Under his mentorship, His team won Gold Medal in Three Olympics. He has an overall record of 115-143 games of working as a head coach. Recently, In early 2021, Auriemma tested positive for the COVID and has been out of the team's training and games.