2015 WNBA Most Improved Player, Kelsey Bone is an American basketball player who is currently signed to the Las Vegas Aces of the Women's National Basketball Association (WNBA). She was picked in the 2013 WNBA draft by the New York Liberty in the 5th round. Further, she played for the Connecticut Sun and Phoenix Mercury.

Houston, Texas native Kelsey Bone was born on 31st December 1991 under the star sign Capricorn. The 2015 WNBA All-star holds an American nationality and is of Afro-American by ethnicity.

A professional WNBA since 2013, Bone enrolled at Dulles High School where she played for the high school team. Upon graduation, she attended the University of South Carolina and later transferred to Texas A&M University.

Currently, Kelsey Bone is signed to the Las Vegas Aces where she is reported to get $112,000 per annum as salary. Earlier this season, she took home $114,736. Besides, she has also played for Phoenix Mercury, Connecticut Sun, and New York Liberty, through which she might have summoned decent sum. 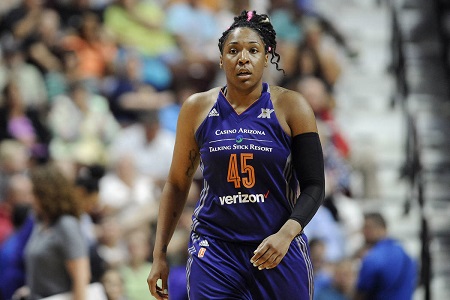 The twenty-seven years old is ranked 37th in the best-paid WNBA player where Jewell Loyd, Allie Quigley, and Angel McCoughtry are ranked at 1st, 2nd, and 3rd respectively.

Looking at her earnings and contract, the WNBA star is estimated to have a net worth of $0.2 million as of 2019.

She was born to parents: Kim Courville-Williams and Warren Bone. She grew up alongside her two younger siblings:  a sister, Lindsey Bone and a brother, Donovan Williams, who is also a basketball player. 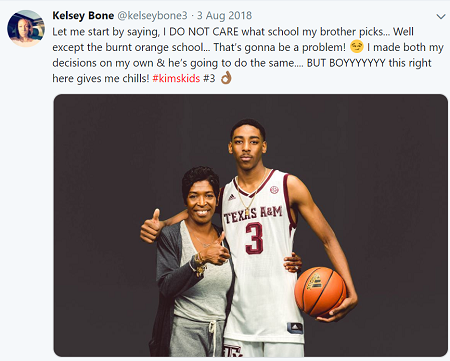 Further, her father, Warren, as well as her uncle, played college basketball at Texas Southern. Not only this, but her other family members were into sports. Her uncle, Britt Courville, and aunt, Janinne Courville competed in track and field at Texas Southern and the University of Houston respectively.

On 15th April 2013, she was picked by the New York Liberty with the No. 5 overall pick in the 1st round of the 2013 WNBA Draft. The following year on 14th April, she along with her teammates Alyssa Thomas and Elizabeth Williams to the Connecticut Sun in exchange for Tina Charles. With the team, she won WNBA All-star.

Further, she was traded to the Phoenix Mercury in exchange for Courtney Williams, Jillian Alleyne and Shayla Cooper on 25th June 2016.

On 1st February 2018, she was traded to Las Vegas in exchange for Imani Wright.