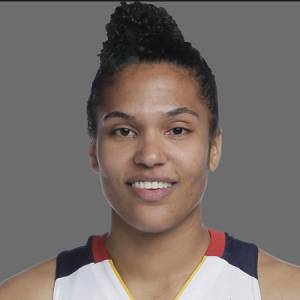 Alyssa Thomas is an American Women's National Basketball League(WNBA) player for the Connecticut Sun. Currently, she is playing in the position of Power forward for the team Connecticut Sun. In addition to playing in WNBA for Connecticut Sun, she also plays in overseas leagues. She was selected by New York Liberty in 2014 in the first round with the No 4 pick in WNBA.

The exact figure of Alyssa Thomas is not disclosed but she might be earning around $75,000 whereas her net worth might be around $500,000.

Is Alyssa Thomas Single? Also, know About her Personal Life

Alyssa Thomas is a shy type girl and so far she doesn't seem to have a boyfriend because she hasn't mentioned anything from which it can be proved that she has a boyfriend.

Further, she is simple and always stands out for her team and was also the University of Maryland's all-time leader due to her top scores in all man and women. Besides the playing career, she is found to be humble and soft speaking.

Alyssa reported in one of her interviews stating that she's more open when she's playing basketball rather than outside the court. She has done a lot for the youth sports which helps in enhancing girl in the sports field to be self-esteemed.

What is Alyssa Thomas's Height, Weight, and Age?

Alyssa is 6 feet 2 inches tall in height and weighs about 84 kg. Currently, she is 27 years old.

What is Alyssa Thomas's Net Worth And Salary in 2019?

Alyssa Thomas is one of the renowned players in the field of women basketball so she might be earning an annual average salary of around $75,000 from his team Connecticut Sun in 2019.

As far as her net worth is concerned, she was in the basketball career for over many years so she might have an estimated net worth of above $500,000. WNBA players have the highest paid record of around 110,000 and there are not many players earning around that score.

Alyssa Thomas was born on April 12, 1992, in Harrisburg, Pennsylvania to the parents Bob and Tina Thomas. She is an American athlete with mixed ethnicity. Further, her star sign is Aries. She has a younger brother Devin Thomas, who is a former Wake Forest Player and a sister Alexia.

Alyssa attended Central Dauphin High School in Pennsylvania where she became the school's all-time leading scorer. After high school, she enrolled at the University of Maryland and played for the University team.

She was honored with various highlights like ACC Player of the Year, ACC Female Athlete of the Year and more. Further, The University honored Alyssa's Jersey in the ceremony on March 2, 2014.

Alyssa was selected 4th overall by the Connecticut Sun in the 2014 WNBA draft. She was named to the 2014 WNBA All-Rookie Team. After the rookie season, Alyssa continued playing for Sun as starting power forward. In 2017 she was voted into the 2017 WNBA All-Star Game. It was her first career all-star game appearance.

Thomas re-signed with the sun a multi-year contract in February 2018. She has also played for the various overseas team in several overseas leagues. She has played for Bucheon KEB Hana Bank in South Korea, Yakin Dogu in Turkey, Yongin Samsung Blueminx in Korean League. She is currently signed with USK Praha of the Czech League for 2018-19 off-season.