Keegan Hansen Bradley is a famous American golf player by profession who plays in the PGA Tours. He has won four tour events and the most notable victory of his remains the 2011 PGA Championship which was in his rookie year.

Keegan Bradley is on the shortlist of the golfers to have won his major debut. The list includes names like Ben Curtis, Willie Park Sr. and Francis Ouimet. He won the 2011 PGA Tour Rookie of the Year.

Keegan Bradley was Born on June 7, 1986, in Woodstock, Vermont to parents Kaye Bradley and Mark Bradley.  He is the eldest of the Bradley Children and he has a sister named Madison Bradley. His father used to be the head professional at the Jackson Hole Golf and Tennis Club.

Keegan Bradley was very fond of skiing and golfing from a very young age, but ultimately he decided to choose golf over skiing. He did his schooling at Hopkinton high school and later joined St. John’s University for his college and graduated in 2008. He has won nine collegiate championships prior to his graduation.

Keegan Bradley turned professional in the year 2008. He started competing on the NGA Hooters tour, where he was the victor in his fifth as well as the final start of the annum on the tour held in Southern Dunes. In the consecutive year, he again won the NGA Hooters tour at the Texas Honing Open.

Bradley's first major  PGA Tour win was in 2011 at HP Byron Nelson Championship. In that year he was voted as the Rookie of the year on the PGA Tour by his peers.

The following year of 2012, Bradley was up against Phil Mickelson and Bill Haas in the 2012 Northern Trust Open. He won his third PGA Tour event at the 2012 WGC-Bridgestone Invitational.

In the year 2013, Bradley had two second-place finishes.  The year 2014 was also not much in Bradley's favor with his highest finish being second place at the Arnold Palmer Invitational. However, by far the worst season for Bradley was the 2015 season where he finished 64th on the PGA Tour's money list.

Who is Keegan Bradley's Wife?

Bradley currently resides at Jupiter, Florida, U.S. The handsome golfer is married to the beautiful Jillian Stacey. They both share the New England natives. The couple tied the knot on December 3, 2016, at the Henry Morrison Flagler Museum in Palm Beach, Florida. 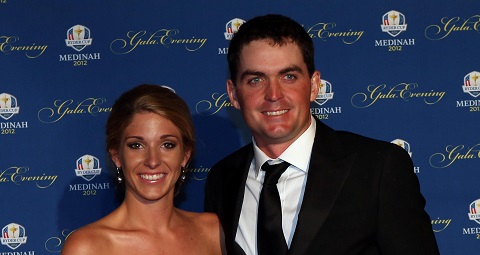 Bradley and his wife Stacey share a child together from their marriage. He is the father of Logan James Bradley, who he welcomed to the world in November 2017.

Logan James Bradley born 11.13.17, 8 lbs 8 ounces, 22 inches. Craziest week of our lives! We couldn't be more in love with this little man, he has stolen our hearts.

Keegan Bradley is a fan of other sports like baseball, basketball, and football with the Boston Red Sox, Boston Celtics, and New England Patriots being his favorite team in their respective fields. In his dream golf foursome, he has included Ben Hogan, Tom Brady, and his father.

He also has endorsement deals with several brands through which he makes huge earnings. In 2014, he signed a contract with the apparel brand TravisMathew. Earlier, he had a contract with Tommy Hilfiger which expired in 2014. Other fellow golfers Charley Hoffman, Chris Kirk, and Matt Jones also has the deal with TravisMathew.

Bradley also has a deal with Nike and will wear the Jordan shoes of the company. His other deals included Putnam Investments, Srixon, Zurich, and Audemars Piguet.

Standing 6 ft. 3 in. tall with a weight of 86 kg, the star golfer is also active in charity works. He has organized various charity events such as the Keegan Bradley Charity Golf Classic and many other tournaments in support of organizations like Vermont Cancer Center and the Vermont Children's Hospital at Fletcher Allen and Vermont Disaster Relief Fund.