An Emmy and Telly Award winner, Katie Witham is a famous sportscaster currently working for Fox Sports as a sideline reporter and host for the network’s MLS coverage. Moreover, she also worked for the ESPN, BTN, and Ohio’s only independent radio station, WWCD 102.5FM.

Katie Witham is reportedly earning around $50,000, annually and has a net worth of over $500,000 in 2019. Katie is currently married to her longtime boyfriend Richie, with whom she shares two children.

Katie Witham Net worth and Salary in 2019

The American sportscaster/anchor Katie Witham has an estimated net worth of $500,000. As of 2019, the reporter receives an annual salary of $50,000 from her successful reporting career with Fox Sports.

According to a survey conducted by the Radio Television Digital News Association, the bare minimum a sports reporter made in 2017 was $17,000 a year, the median starting salary was closer to $31,000 annually. The top wage for a sports reporter was $100,000 per annum in 2017.

As per her wiki, Katie Witham got married to her boyfriend Richie on September 3rd, 2012 after being in a romantic relationship for a long time.

The couple is living a happy married life since there are no rumors regarding their divorce or separation and no conflicts are seen.

Katie has posted several photos showing that she is pregnant and besides, she has written on her official Instagram account about herself that " Daughter, Sister, Wife, soon-to-be new Mom, + Broadcaster. My life in front (+ behind) the camera through my own lens ?? “Find the good in every day.”

We can clearly tell that Katie has a daughter with her husband and is expecting her second child. 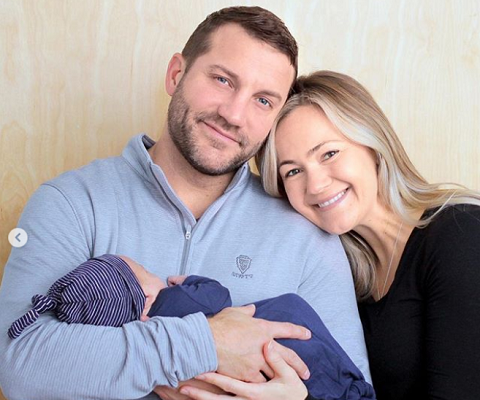 Other than being a famous sportscaster, Katie is quite popular in social media with a huge number of fan following. Moreover, she is also an animal lover and has kept pet dogs.

Katie Witham was born in Alliance, OH, the United States. Witham holds an American nationality and belongs to the White ethnic group. She has an older brother and a younger sister.

Witham holds a Bachelor of Arts in Broadcast Journalism from the University of Capital, where she co-captained the women's soccer team, earning athletic and academic honors for the entire conference. She also coached soccer college and high school varsity softball.

Katie works as an ESPN host and sideline reporter covering several soccer properties, including MLS and the United States National teams. She has also reported on BTN, FOX Sports South, the Cleveland Indians, and the Columbus Crew.

Katie 's career extends beyond television, after spending three years in Columbus, the only independent radio station in Ohio, WWCD 102.5FM. In January 2017, Katie Witham joined FOX Sports as a sideline reporter and host of the MLS coverage of the network.