Kasper Peter Schmeichel, famously known as Kasper Schmeichel is a professional football player who plays as a goalkeeper for Denmark National Football Team and the French League club, Nice. He began his professional career with Manchester City in 2005.

He has an estimated net worth of $20 million. Currently, he is married to Stine Gyldenbrand.

A Danish by birth, he has played for English clubs like Manchester City, Leeds United, and Nott County along with several other clubs. He represented Denmark in their youth levels and started playing for Denmark’s Senior team in 2013.

He spent most of his childhood days in England and Portugal as his father played for European clubs for the most part of his career. Growing up, he attended Hulmer Hall School in Manchester, England, and Saint Julian School in Portugal.

His childhood friend was Alex Bruce who is a defender playing for the English club, Wigan Athletic.

Kasper Schmeichel’s Net worth and Saalry

Kasper Schmeichel's current salary is £ 1 million as per his contract with the club. He received annually from his club football is reportedly over $2.56 million from his club, Leicester City, and his weekly wage reportedly around $49,000. 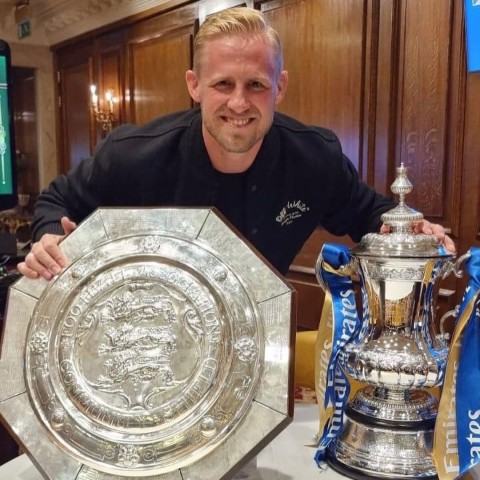 His total net worth is estimated to be over $20 million. He further signed an endorsement deal with Precision Goalkeeping in 2010 and is a brand ambassador for the sports producer. The goalkeeper's current market value in 2018 was anywhere around $27 million.

Schmeichel owns several cars including a Range Rover. Besides, he is also seen driving a Mercedes SLS supercar and a Mercedes Vito van with a bed in the back. He was awarded a BMW car worth $140,000 after Leicester City won Premier League. Further, his father, Peter has a net worth of $25 million and also owns a house in Espergærde, Denmark.

After joining the youth clubs of the Portuguese team, Estoril, and the English club, Manchester City, he started his career professionally with Manchester City in 2005 and was transferred to Darlington FC, Bury FC, Falkirk, Cardiff City, and Coventry City from Manchester City. Finally, he made his debut for Manchester City against West Ham United in 2007.

After several seasons with Manchester City, he signed with Notts County FC in August 2009 for a record transfer deal, it was revealed that he was the highest transfer for Notts as he earned £1 million as an annual income from the club.

During the time, he was part of the team that went on to win Football League Two in 2009/10. He, later on, joined the English second-tier club, Leeds United FC, and signed a two-year contract in July 2010. Schmeichel was the first-choice goalkeeper for the club and made his professional debut for the club against Derby County on 7th August 2010.

The Danish goalkeeper is currently with the English club, Leicester FC after penning a deal on July 1, 2011, with a transfer fee of $2.07 million. He had a great first season for Leicester playing over 50 matches with recorded 17 clean sheets and saving many crucial penalties.

His fine performances helped him to win Leicester Player of the Year in the 2011/12 season. With the club, he won Football League Championship in 2013/14 and the Premier League title in the 2015/16 season.

The Danish ace goalkeeper played for the Danish U-19 team before he made his international debut against Malta on 15 October 2013 during the 2014 World Cup Qualifier.

The winner of Danish U-21 talent of the Year in 2007, Schmeichel has represented Denmark in Euro 2012.

He, along with Simon Kjaer, Christian Eriksen, and Andreas Cornelius, was some of the key players that were a part of a successful Denmark team that qualify for the 2018 FIFA World Cup. He was also a member of the national team at the Euro Cup 2020.

Who is Kasper Schmeichel’s Wife?

Kasper and Stine first met in 7-Eleven at Nørreport Station while Kasper was 17. 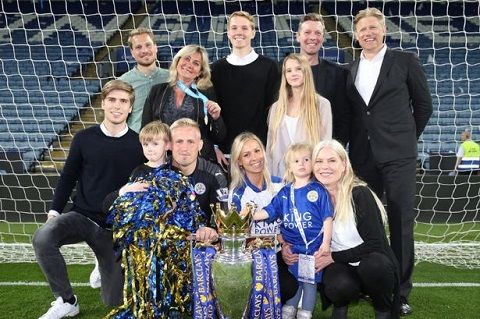 Kasper's wife, Stine is a graduate of the University of Chester in 2009. She has also worked as a midwife at a hospital near Birmingham. The couple has also been actively supporting humanitarian causes and founded The Gyldenbrand Schmeichel Foundation in 2012. He is happy and loves his family and his kinsmen from the bottom of his heart.