2018 Morris Trophy-winning football player, Kaleb McGary is currently signed to the Atlanta Falcons of the National Football League (NFL) as their No.76 offensive tackle. He was selected in the first round of the 2019 NFL draft by the Falcons with 31st pick.

Kaleb McGary was born on 22nd February 1995 in Battle Ground, Washington. He is an American by nationality who belongs to the white ethnic background. The twenty-four years old hunk stands 6 ft 7 in (2.01 m) tall and weighs around 317 lb (144 kg).

Currently Under $10.2 Million Contract, How Much Is Kaleb McGary Net Worth In 2020? 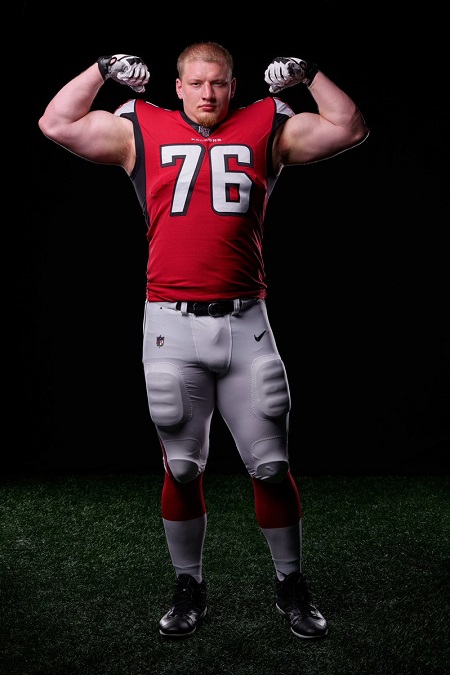 As of 2020, McGary's net worth is estimated at over $3 million, solely earned from his NFL career.

Brianna Shannon is a hot Wag who belongs to No. 76 – Atlanta Falcons' offensive tackle. The two are in living together relationship for a long time and dating since 2011. 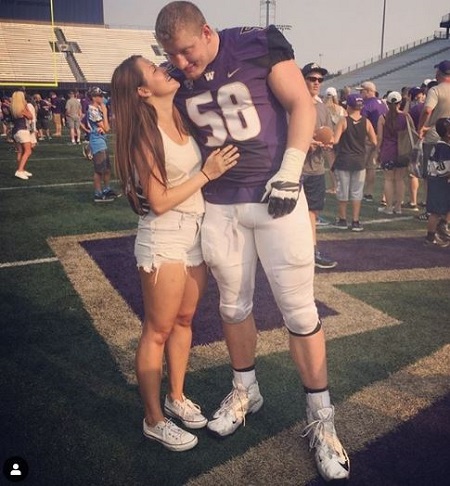 His sweetheart often visits during games to support McGary. Seems like the duo is pretty serious about their affair and tie the knot in near future.

Kaleb is one of three children born to parents: Justin McGary and Cassandra McGary. He has a brother, Justin and a sister, Savannah, now a student at Montana State.

When Kaleb was in high school ( Battle Ground High School), the McGary family lost its sprawling farm in southwest Washington during the middle of the economic recession. At the same time, Kaleb's brother Justin was diagnosed with multiple sclerosis.

Upon relocating to Fife, the family lived in an RV, and soon an arrhythmia was found in Kaleb’s heart during his junior year at Fife High. Doctors initially feared could threaten his football career.

In January 2018, a fire in the RV spread and burned almost half of Kaleb's family house.

During his high school, McGary played offensive line, tight end, and defensive line. Upon graduation, he played for the University of Washington where he started 47 of 53 games.

At the 2019 NFL Draft, McGary was drafted by the Atlanta Falcons with the 31st overall pick in the round one.