Justin Verlander is an American baseball player who currently plays for Houston Astros of Major League Baseball. He played as a baseball pitcher for the Detroit Tigers of major league baseball. He also won the World Series title with Houston in 2017.

His story of development and experiences about his life are described in his parents' book, Rocks across the pond: lessons learned, stories told.

Net worth, Salary, and Charity of Justin Verlander

He has an estimated net worth of $95 million as of 2019. The significant source of his income is MLB career. Verlander has so far earned about $237,291,000 from salary and bonus in his MLB career.

He bought a real estate Beverly Crest, a Los Angeles neighborhood for $5.25 million in December 2017. He also has a Lamborghini Aventador Roadster bought in 2014 for around $400,000.

Verlander has a huge collection of cars which includes several luxurious cars like a Ferrari California, Ferrari 458 Italia, a Maserati Gran Turismo, a Mercedes-Benz SL55, an Aston Martin DBS, and a Mercedes-Benz SLS AMG.

Verlander has started the "Wins for Warriors Foundation" for veterans of the U.S. military and has donated over $2 million for this cause. He has also supported various local Detroit charities and helped out the national efforts such as the Red Cross.

Personal Life of Justin Verlander; Does he have a Girlfriend?

Verlander had a girlfriend named Emily Yuen in the past. The couple had been dating since they attended Goochland high school which is located in Virginia.

They continuously dated each other through years at Old Dominion University. Yuen was so close to Verlander mother as she used to call his mother once in a day. Unfortunately, he is no longer in a relationship with Yuen.

He then met Kate Upton in 2011 and started dating her. The couple got engaged in 2016 and married a year later on November 4, 2017, in Tuscany, Italy. Verlander first saw Kate at a commercial for the first time and fell in love with her.

It’s not Monday but I’m always crushing on this man ???? @justinverlander

They had their honeymoon in Puglia. On July 14, 2018, the couple revealed that Kate is pregnant with their first child.

Didn’t win #cyyoungaward , but I can’t be too upset when I have this little girl waiting for her daddy off camera!

They welcomed their daughter, Genevieve Upton Verlander, on Nov 17, 2018.

Talking about his physique, he stands at the height of 6 feet 5 inches tall and weighs 225 pounds.

Justin Verlander was born on February 20, 1983, in Manakin-Sabot, Virginia. He is the son of Richard Verlander (his father) and Kathy Verlander (his mother). He has a younger brother whose name is Ben Verlander.

Justin and his brother grew up in Manakin-Sabot, Virginia. His younger brother has also played for the Tigers organization as an outfielder. They played one game together during spring training.

His father sent him to the Richmond baseball academy where he was able to throw his fastball 84 mph shortly after joining the academy. His velocity improved at 86 mph at Goochland high school as a senior.

During the first year at Old Dominion, his velocity increased to 87 mph. He has played baseball for the Old Dominion University as a team member for three years. He struck out a then-school record 17 batters against James Madison on May 17, 2002. He set a single-season record in school with 139 strikeouts in 2003.

In 2004, he broke his own record and established a new colonial athletic association record with 151 strikeouts. He averaged 11.5 strikeouts per nine innings during his three years and his career collegiate earned run average (ERA) was 2.57.

Justin Verlander has also played for the USA national baseball team in 2003 where he helped them to earn a silver medal in pan American games. He was titled as the CAA Rookie of the year in 2002 and earned All-CAA honors in 2003 and 2004.

He was the second overall pick in the 2004 major league baseball draft by the Detroit Tigers and was titled as the ODU alumni association's male athlete of the year in 2004.

He signed the contract with the Detroit Tigers on October 25, 2004, and began his career as a professional baseball player when the Tigers selected him second overall in the 2004 MLB draft.

He started against the Cleveland Indians and pitched 5 innings on July 4, 2005. He was a starting pitcher and was recognized as a Florida state league all-star according to Baseball America.

He recorded a no-hitter against the Milwaukee Brewers, striking out 12 while throwing a fastball 102 mph. He finished with a record of 19-9, an ERA of 3.45 and an MLB-leading 269 strikeouts in the year 2009.

He recorded his 1,000th career strikeout in a 9-3 win over the white sox, becoming the 15th tiger on April 22. He recorded his second no-hitter against the Toronto Blue Jays. He scored four strikeouts, walking one batter and throwing at a maximum speed of 101 mph on the radar gun in that game. 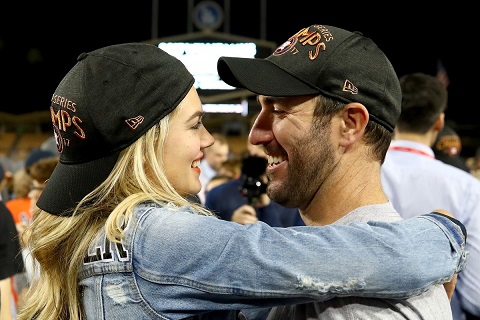 Justin Verlander took a no-hitter into the ninth inning before giving up a one-out single in a 6-0 victory against the Pittsburgh Pirates.

He was named to the American League team roster and AL starting pitcher in the all-star game. Verlander and the Tigers reached a seven-year contract of seven million dollars with 22 million dollars.

Currently, he plays for the Houston Astros. He made his debut for Astros on September 5 against the Seattle Mariners.