His current net worth as of 2019 is reportedly around $4.8 million. Currently, he is in a living-in-relationship with Texas model, Daniella Rodriguez

24 years old, MLB star Carlos Correa, a Puerto Rican native is a Puerto Rican by his nationality and is from a mixed Caucasian-Hispanic ethnic background. Further, his zodiac sign is Virgo.

Carlos Correa was born to Sandybel Oppenheimer (mother) and Carlos Correa. Sr. and grew up alongside two siblings Jean Correa and Leibysand Correa.

He was born and raised in his Ponce, Puerto Rico, in a working-class family. His family had a low income and lived in a small house in Barrio Velazquez.

From his childhood, he has shown his strong devotion towards the game, and as a result, at this moment, he is one of the best players on his team.

He was drafted first overall by the Astros in 2012 agreeing on a $4.8 million signing bonus for Major League Baseball Draft. He is the highest selection to come directly from a Puerto Rican High School.

He is also the 3rd Latino to be the first overall selection in the MLB draft, after Alex Rodriquez and Adrian Gonzalez. After being signed by Houston Astros, he spent a year getting transferred to several clubs before finally starting his career for Houston Astros in 2015.

Carlos debuted in a 3-1 loss to the Chicago White Sox, going 1-for-4 with an RBI single off of Chris Sale. On June 9, 2015, Correa stole his first career base hitting his first MLB home run off of Zach Duke. Further, he became the second-youngest player to steal three bases in his ninth game, after Rickey Henderson who won Correa by 21 days.

Correa became the youngest player in the Astros' history to hit a home run on an Opening Day in his 2016 season debut. In September, he was kept out of the team after he suffered a shoulder injury. Correa ended the season with a .274 batting average, a .361 on-base percentage, a .451 slugging percentage, 20 home runs, and 96 RBIs. 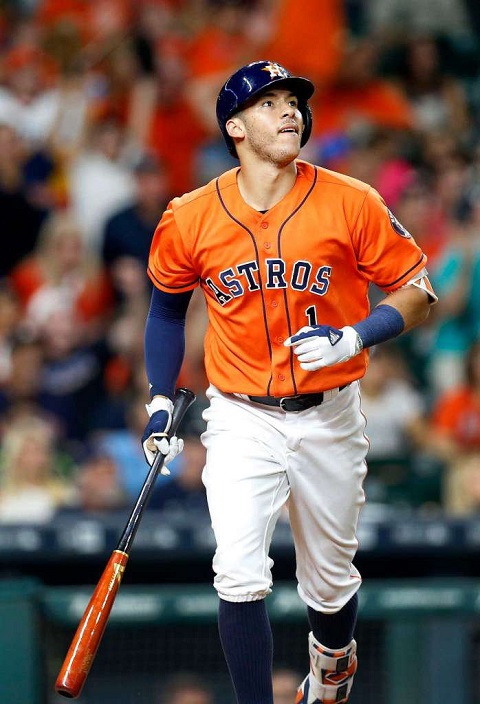 In 2017, Astros won the World Series in Game 7, winning their first ever title in franchise history. Correa was named the AL Player of the Month in May 2017.

During his six years long career, Correa has received several honors and has represented his country in World Baseball Classic All WBC Team where Puerto Rico ended as the first runner-up.

Carlos Correa reportedly has earned total career earnings of $7.18 million as of 2018. His salary as of August 2018 is reportedly over $330,013. Further, as of now, Carlos Correa is reported to have a net worth of around $4.8 million. As there are very few people that can achieve the level of success, that Carlos achieved at a very young age.

He is not only earning big time but knows to spend his money for the right cause. He is involved in charity work, including helping Hurricane Harvey affected children and has donated a good share of time and money to Puerto Rico's Hurricane Maria hit places.

The 24 years old MBL star Carlos Correa after winning 2017 World Series, outed that he and former Miss Texas USA 2016 Daniella Rodriguez are in a living-in relationship.

He further, purposed his model-girlfriend on National television. Hence, they are engaged and are living together in Correa's Houston based home along with a dog named Groot.

This just happened when we got back to the hotel! I wanna thank all the fans for the support and love that you guys have showed us on our engagement this week! You guys are the best P.S. I promise that I will work on her signature lol

Further, Correa shares a very loving relationship with his younger brother, Jean Carlos Correa, who drafted by the Astros in the 2018 MLB draft.

Carlos is 6 feet and 4 inches tall in height and weighs around 190lbs. His scouting report with MLB shows that Correa has a batting average of .277, home runs (29), Runs batted in (87), stolen bases (19) and OPS .855. One can easily catch him on Twitter and view his photos and uploads on Facebook, and Twitter. A lot more info we can get from Wiki too.