Julian Erosa is a well-known American mixed martial artist. He has been fighting in the professional league for more than a decade. Julian made his professional debut in October 2010. Erosa is the former CageSport Featherweight and Lightweight Champion. Julian competes in the Ultimate Fighting Championship in the Lightweight division.

Julian Erosa was born Julian Ricardo Dulican Erosa on July 31, 1989, in Seattle, Washington. He is the son of Ricardo Erosa and his wife, Debbie Erosa. Julian has a younger brother, Ricky. Erosa was an avid skateboarder and snowboarder but later started training mixed martial arts. Talking about his physical appearance, Julian stands six feet and one inch tall and weighs 70 kg.

Julian started training in mixed martial arts in his early teens. He finished his amateur career with 10-0 records. Erosa made his professional debut in October 2010 in CageSport 12 against Angel Diaz. The American fighter won the match via KO in the first round. After that, Erosa fought in six games until the end of 2011 and won all the matches.

In February 2020, Julian played in the CageSport 60 and then returned to the UFC. Erosa won his match against Sean Woodson and also won the Performance of the Night prize money. Erosa is scheduled to face Seung Woo Choi on June 19, 2021, at UFC on ESPN 25.

Julian is married to his longtime girlfriend, Alaina Evans. The duo walked down their wedding aisle in mid-2016. They had been dating for several years before tying their wedding knot. He is an active social media user and keeps sharing a lot of photos on his timelines. 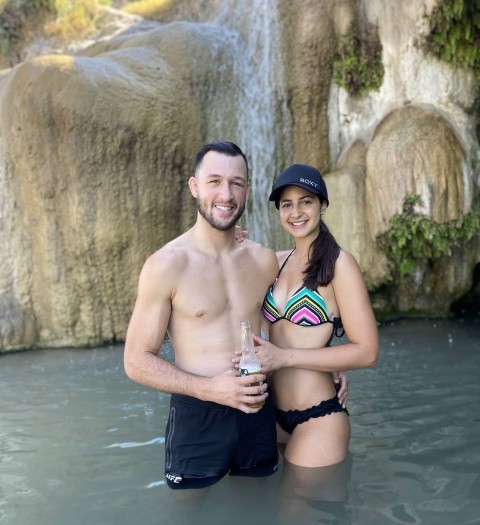 Julian along with his wife, Alaina, at a vacation SOURCE: [email protected]_erosa

The love birds are yet to add a new member to their family.

Julian Erosa has an estimated net worth of more than $1 Million. Julian earned $79,000 from a single match against Sean Woodson. In addition, he earned $50,000 for the performance of the night. Totaling his career earning from UFC, it sums to $171,000. Julian is at the peak of his career and must be making a handsome amount through his sponsorship and contracts.