Jorginho is a well-known rising professional football player. He has been playing in the English Premier League for the Chelsea Football Club. Jorgino plays as a midfielder for his team. He operates as a defensive midfielder or a deep-lying playmaker. In 2018, He won the UEFA Europe League in his first season.

Jorginho was born on Jorge Luiz Frello Filho on December 20, 1991, in Imbituba, Brazil. He is the son of Maria Tereza. His parents separated shortly after his birth and then moved to Italy and started living with his maternal grandparents. Jorge started playing football from a very early age. Jorginho stands five feet and eleven inches tall and weighs 68 kgs.

Filho started playing for Hellas Verona in his early days. In June 2010, He was loaned out to Seria C2 side, A.C Sambonifacese, and played his first full senior season for the Veneto Club. Jorge made his professional debut with Verona in September 2011. After playing in the league for three seasons, The player moved to Napoli. He scored the last goal as Napoli overturned a 3–2 first-leg deficit to beat Roma and win the 2014 Coppa Italia Final.

Jorginho could not make much impact and play with the team for the next three seasons. In 2017 Jorginho had a breakthrough season with Napoli and was integral to their Serie A title challenge. In 2018, Chelsea signed him on a five-year contract of $70.5 Million with a potential of $10 Million in Add-ons. AS per sources, He was about to sign a contract with Manchester City. On 29 May, Jorginho featured in Chelsea's 4–1 victory over Arsenal in the 2019 UEFA Europa League Final.

In the 2020/21 season, Filho made his 100th appearance for the club. He has been a go-to player for the team. Jorginho is part of the 2021 UEFA Champions League Final against Manchester City. Their first final in the League since 2012.

Jorginho is married to his longtime girlfriend, Natalie Leteri. The love birds tied their wedding knot in 2017. They had a private wedding ceremony where they had invited only a few members from both the families and some close friends. 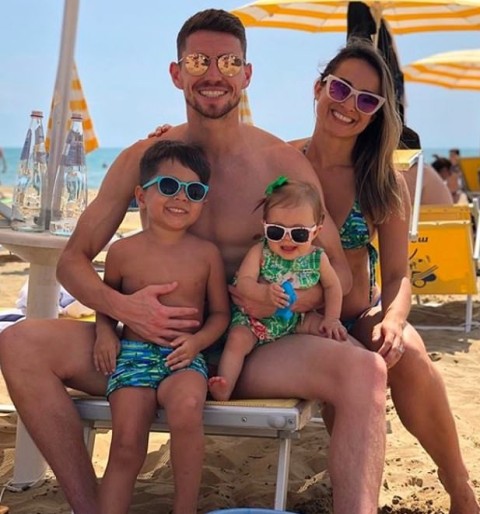 Jorginho along with his former wife and two children SOURCE: [email protected]

Shortly after the wedding, Jorginho and Natalie welcomed their first child, Alicia. The family of three extended to four after the birth of their second child, Vitor. In 2019, The duo separated from each other and moved on as Jorignho does not show much of his personal life in the media. There is not much information about the reason for their separation.

In 2020, There have been rumors that Jorginho started dating The Voice contestant Catherine Harding. In September, She gave birth to a child, Jax. Neither Jorginho nor Catherine has shared a word about the biological father.

Jorginho has an estimated net worth of more than $50 Million. The Italian professional football player has earned much of his net worth through his successful football career. He signed a $70 Million deal with Chelsea in 2018. Filho must be receiving a handsome amount through his country for representing in numerous international events.