Carlos Soler Barragan a.k.a. Carlos Soler is a Spanish professional footballer who is currently signed to Valencia CF. The central or right midfielder has played for the Spain U19 and U21 national and is yet make his senior team debut for his national side.

Valencia, Spain native, Carlos Soler was born on 2nd January 1997, under the star sign Capricorn. The twenty-three years old holds a Spanish nationality. Regarding his physique, he stands 1.80 m (5 ft 11 in) tall and weighs 72 kg.

Currently signed to La Liga side, Valencia, Carlos Soler weekly makes £37,000 i.e, £1,924,000 per annum. Geoffrey Kondogbia, Kevin Gameiro, and Goncalo Guedes are the highest-paid athlete of the team. On 8th October 2020, his market value is updated €30 million. His highest market value to date is recorded €50 million on 11th June 2019.

Besides, Carlos earns much from his endorsement deals. He is currently endorsed by Adidas and Gatefootball. As of 2020, his net worth is approximately $2 million. There is no other information regarding his financial aspects.

Who is Carlos Soler's Girlfriend

Well, currently, he is in a relationship with a woman named Cristina Torres, who is of the same age. They have been together since around 2017. Cristina Torres is a simple woman and far from glamorous, who is usually synonymous with European professional footballers. Not much information about it. Even the Instagram account is private, and not everyone is free to view the photos or videos. 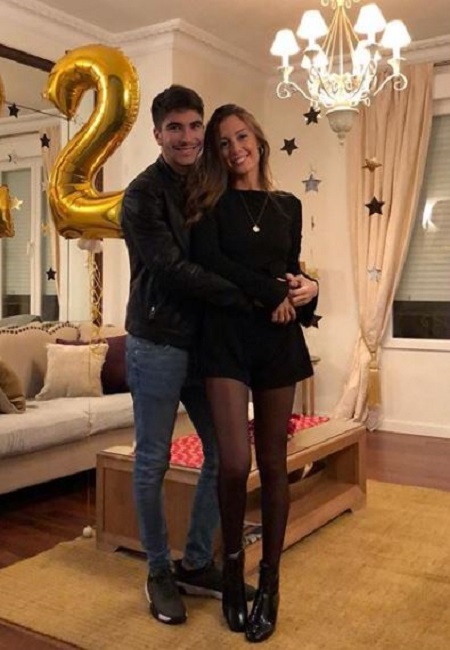 However, a number of photos of Cristina Torres can be found on Carlos Soler's Instagram account. Here are a few of them.

A matter of fact, Carlos Soler has not revealed much information regarding his parents and other family members. However, he sometimes shares pictures with parents and grandparents. Additionally, there are no records of his academic background.

At the age of eight, Carlos Soler joined Valencia. Initially a striker, he turned to an attacking midfielder and to a central midfielder. On 3rd May 2015, he made his senior debut with the reserves starting in a 0-1 Segunda Division B away loss against UE Cornella. On 13th December 2015, he scored his first goal in a 2-2 draw at CF Badalona.

On 10th December 2016, he made his senior team debut and La Liga debut in a 2-3 loss to Real Sociedad, replacing Mario Suarez at the Anoeta Stadium. As of November 2020, he has played overall 120 matches with 12 goals for the team.