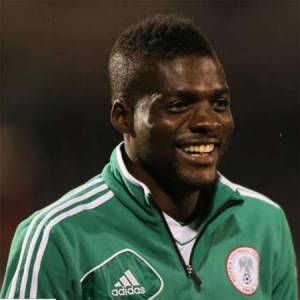 John Ogu is an international footballer who currently plays as attacking midfielder and central midfielder for National team of Nigeria and Hapoel Be'er Sheva. The 31-year-old footballer has played for many clubs that include Drava Ptuj, Atletico CP, Almeria B, Leiria, and Academica, etc.

Along with a thriving career, the shirt no. 30 has a beautiful personal life. He is married and blessed with a baby girl with his wife. Further, Ogu has an estimated net worth over $1 million.

Apart, he earns a handsome amount of money from endorsing brand companies, “Adidas”.

John Ogu's Personal Life; Who is his Wife?

On December 29, 2015, Ogu got married to his fiance, Chicago Veronica Akaolisa at Ndiojukwu in Anambra State. He officially revealed that the day was "the happiest day of his life”. 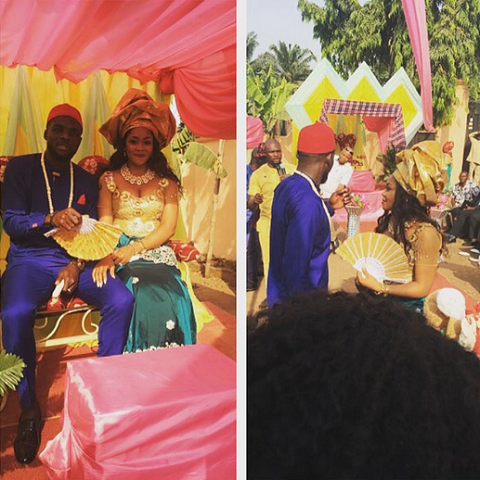 Ogu's wife Chicago graduated from the University of Alberta. He proposed his wife very romantically by popping the question at the stadium in front of his teammates. Ogu's wife is a blogger, entrepreneur, and novelist.

CAPTION: John Ogu with his spouse and baby SOURCE: kemifilani.com

They expanded their family with a beautiful daughter, Ivanna born in June 2016.

John Ogu was born on April 20, 1988, in Lagos, Nigeria. Currently, Ogu is named as one of the successful players, and he credited to his supportive parents for this. He dropped out of school to pursue his passion.

When Ogu was in a school, he dreamed to be a banker and stated that “if I wasn’t a player, then I would have been working in the bank”. Ogu belongs to black ethnicity and holds a Nigerian nationality.

Following his youth career, John Ogu has played for Akwa Starlets, Akwa United and Fly Sports Academic.  On July 2006, he was transferred to Drava Ptuj on a free transfer. During his four seasons with the team, he scored 8 goals in 97 appearances.

Looking forward to that Important Game coming up!!???????? pic.twitter.com/J0x92wIcsd

On November 1, 2011, Ogu signed a contract with Leiria where he scored 3 goals in 17 appearances before leaving the club in 2012.

On July 27, 2012, John Ogu was transferred to Coimbra on a free transfer and scored his first goal in Portuguese Cup matches. His first league goal came against Vitoria de Setubal, Portuguese Premier League. He has scored 1 goals in 27 appearances until 2014.

On August 1, 2014, Ogu signed a five-year contract with the Hapoel Be'er Sheva while his market value was estimated at £900 thousand. He scored his first goal against Maccabi Netanya in a victory 4-0.

In March 2013, Ogu was called up to the National team of Nigeria for 2014 FIFA World Cup Qualifier and earned his senior cap under the coach Stephen Keshi on March 23, 2013, against Kenya, replacing Victor Moses.

On May 31, 2013, Ogu's first international goal came against Mexico at the Reliant Stadium, Houston. He was named one of 23 players for the 2013 FIFA Confederations Cup by coach, Stephen Keshi.

On November 10, 2017, Ogu scored his second goal against Algeria in 2018 FIFA World Cup Qualifier. For the nation, he earned 23 caps, scoring 2 goals.

Ogu, along with Wilfred Ndidi, John Obi Mikel, and Uche Henry Agbo, was called up to the Nigeria squad on November 14, 2017, against Argentina.