One of the renowned footballers in Nigeria, Wilfred Ndidi, is currently playing as the midfielder for National Team of Nigeria and Leicester City. He previously played for Genk for two years. Ndidi was the member of the youth team of Nath Boys Academy.

Jersey No. 25 midfielder currently earns £50,000 weekly and has an estimated net worth over $2 million. Regarding his personal life, Ndidi is dating his long-time girlfriend.

Wilfred Ndidi Salary in 2019; How much is he Worth?

In 2017, he moved to his three-bedroom apartment near to the Power Stadium.

Before he moved to his new house, Ndidi stayed a couple of months in a two-bedroom hotel which cost N56,700 per night.

Ndidi is a married man. He exchanged the wedding vows with his long-term girlfriend, Fortune, on 23rd May 2019 in a traditional wedding ceremony in Abuja. 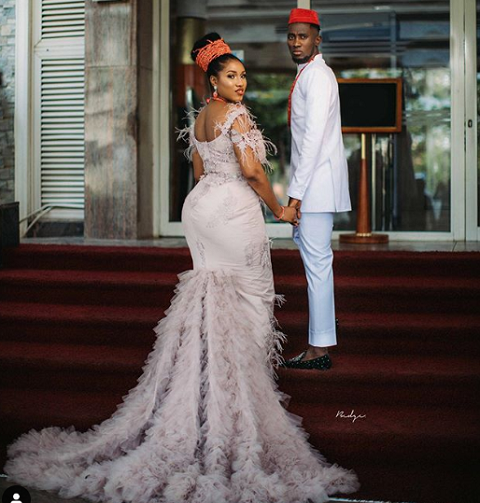 The footballer and his lady, Fortune, a medical student have known each other since they were teenagers and have been dating for a couple of years.

Ndidi often posts snaps with his girlfriends on Instagram.

What's more, the pair has planned a long honeymoon after AFCON 2019.

Wilfred Ndidi was born on December 16, 1996, in Lagos, Nigeria with the birth name Onyinye Wilfred Ndidi.

Ndidi belongs to black ethnicity and holds a  Nigerian nationality.  He was born to his father, Theo van Viederden, military man and mother, Marleen van Vlierden, trader and he grew up with his two sisters. His father didn't want him to become a football player.

Ndidi grew up at the Military Cantonment in Lagos and began playing football at the Command Children School. Ndidi then played for Nath Academy.

Ndidi dumped school to pursue his career in football. He shared pictures of his mother on Instagram.

Ndidi has played with the Nath until 2015 and won numerous awards. Firstly, he played a striker, and then he changed his position as a central defender.

On January 15, 2015, Ndidi signed to KRC Genk with the transfer fee of €180 thousand and made his debut against Charleroi replacing Jane Vrijsen.

Ndidi scored 4 goals in 61 appearances before leaving the club in 2017.

On January 3, 2017, Ndidi signed a five-year contract with Leicester with the transfer fee €17.60 million and made his debut for the club against Everton on January 7, 2017, in the FA Cup.

Ndidi's first Premier League match came on January 14, 2017, against Chelsea. He got his first red card against Crystal Palace in his birthday of 2017.

So far, Ndidi scored 4 goals in 48 appearances. As a magical payer, he won the Young Player of the Year.

In 2013, Ndidi earned his first international cap with the Nigeria U-20 with whom he played 7 matches. He then called up to the First Nigeria team in October 2015 and made his competitive debut against DR Congo.

Later, Ndidi played a substitute for John Obi Mikel in the 3-0 win away Cameroon. He was named in the 35-man provisional squad for the 2016 Summer Olympics.

For the nation,  he earned 24 caps since 2015. Ndidi, along with John Ogu and Uche Henry Agbo called up against Argentina on November 14, 2017. Likewise, he was also named in Nigeria’s preliminary 30 man squad for the 2018 World Cup in Russia.