John Edward Thomas Moynahan was born with a gold spoon in his hand. John is better known as the son of an American football player who plays as a quarterback In the National Football League for the Tampa Bay Buccaneers, Tom Brady. Moynahan has lived quite an illustrious life thus far as a 14-year old.

John Edward Thomas Mayonahan was born on August 22, 2007, in Santa Monica, California. He is the eldest son of Tom Brady and his former girlfriend, Bridget Moynahan. His father is an American football star, and his mother is an American actress and model. John is currently studying in his Middle School and enjoying a lavish life.

Tom and Bridget started dating each other in 2004. They have not shared their first meeting instance with the public. However, This was not the first public relationship with Bridget as she dated screenwriter Scott Rosenberg from 2001 until 2003. Brady and Bridget were very much open about their relationship status and very supportive of each other. In late 2006, Rumors of the couple splitting rose to fame. 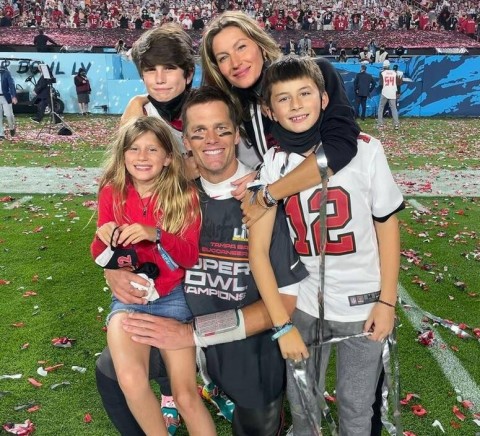 John shares a photo with his parents and siblings after Super Bowl SOURCE: Hello Magazine

In February 2007, the Market hit hard when People Magazine confirmed Bridget's pregnancy with Tom's child. The former partner has maintained a cordial relationship since the birth of their son. Tom had started dating Gisele Bundchen shortly after the break-up with Moynahan. After remaining single for some time, Bridget found love with Andrew Frankel and married at Hamptons on October 17, 2015.

Tom and Gisele got married in February 2009 and welcomed their first child, Benjamin Rein, in December 2009. The family of three extended to four with the birth of Vivian Lake in December 2012. John spends his time sharing between his father and mother.

John is indeed living a life of dreams. He spends his free time and vacations traveling to famous holiday destinations with his parents globally. In June 2017, the father-son duo had been to Asia Tour. John participated in Tom’s American football clinic in Tokyo and showed off some of his football skills. Also, He has been part of numerous episodes, and in an episode of ‘Live with Kelly, John wished to win a gold medal in swimming someday. 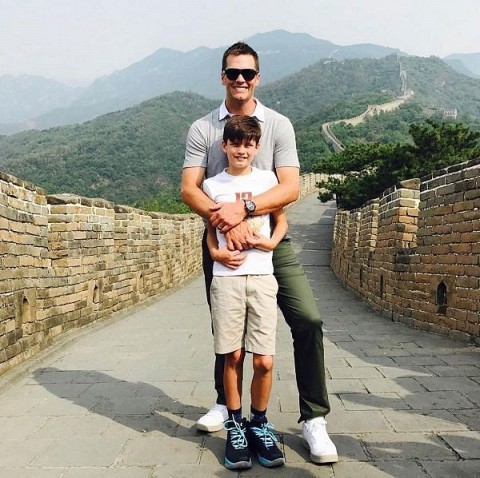 John along with his father Tom at Great Wall Of China SOURCE: People

Tom Brady has a net worth of more than $400 Million. He has earned most of his net worth through his successful career in American football. He is one of the most successful American football players with seven Super Bowl Championship. Many regard him to be that lucky charm for the franchise. Brady has earned $230 million in salary and another $100 million in endorsements. Brady receives an annual salary of $27.5 Million from the Buccaneers. His history of endorsements includes Under Armour, UGG, Tag Heuer, and Aston Martin.

Jonh's biological mother, Bridget, has a net worth of more than $20 Million. She has been working as an actress and model for more than two decades. Moynahan is best-known for her role as Erin Reagan in the police drama Blue Bloods and has been with the series since 2010.