John Brannen is an American basketball coach who currently stands as the head coach of the University of Cincinnati Bearcats. Previously, he held the same position at Northern Kentucky (2015-2019). Before that, he served as an assistant coach at Alabama, VCU, St. Bonaventure, Eastern Kentucky, and Charleston.

A former athlete, he finished his high school career at Newport Central Catholic High School and then played for Morehead State University (1992-1994) before transferring to Marshall University (1995-1997) as well as graduated with a bachelor's degree in business management. Also, he had two seasons of professional basketball in Belgium's First Division.

Alexandria, Kentucky native, John Brannen was born on 18th January 1974, under the star sign Capricorn. The forty-seven years old holds an American nationality and as per ethnicity, he is white.

How Much Is John Brannen's Net Worth In 2021? Salary & Contract

John Brannen is currently under a six-year $9 million contract. As per the deal, his compensation will be $1.5 million per annum which lists him #68th position in the pay list of college basketball coaches. Kentucky's John Calipari, Duke's Mike Krzyzewski, and Villanova's Jay Wright are ranked 1st, 2nd, and 3rd respectively.

Also, Cincinnati has agreed to pay $500,000 to Northern Kentucky for Brannen’s buyout. What's more, if Brannen stays at Cincinnati till March 31, 2022, then he’ll earn a retention bonus of $1 million. The head coach will also make an annual golf club membership for business use with an annual business entertainment allowance of $10,000.

Besides, the coach will have performance-based incentives:

Brannen is married to Lisa Elswick, a realtor and also a Kentucky native. The couple tied the knot in August 2005 in a secret ceremony. There is not much information regarding how and where they met, their dating life, and many more. 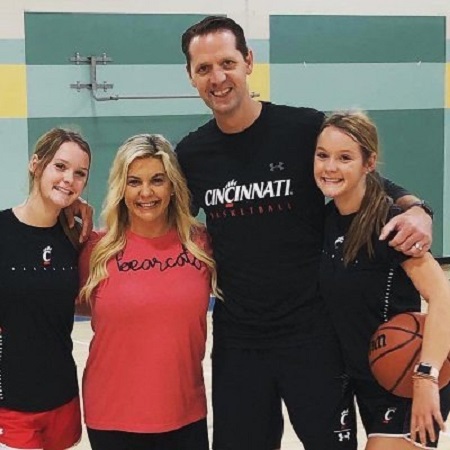 The couple is proud parents of twin daughters: Jaylee Brannen and Katelyn Brannen, born in 2007. The family of four is living a blissful life.

Brannen began his coaching career at Charleston in 1999 as an assistant. The following year, he was with Eastern Kentucky till 2003 and then spent three seasons at St. Bonaventure. In 2006, he was hired by the VCU where he would act as an assistant until 2009. Then he joined Alabama where he was promoted to the associate Head Coach (2013-2015) and also interim head coach (2015).

In 2019, he was named the head coach of Cincinnati. The following season, he won the 2020 AAC regular season. On 3rd April 2021,  he was placed on indefinite leave.