Joel Pohjanpalo is a Finnish professional football striker who plays for the German team Union Berlin competing in the Bundesliga. Internationally, he represents the Finland national football team. He was Finnish League division-two, top scorer, in 2011.

Pohjanpalo was born in Helsinki, Finland on September 13, 1994. He was trained by PK-35, a dissolved football team from Vantaa, Finland. He later enrolled at the youth academy of Helsingin Jalkapalloklubi (HJK), one of the heavy giants who has competed in the Finnish top division league for ages.

Pohjanpalo made his senior debut in 2010 with Klubi-04, the reserve team of HJK. For the squad, he made 26 appearances scoring 33 goals in all competitions - consequently winning the series player of the season. He was promoted to HJK main roster in 2011, playing his debut match on April 15, 2012.

He contributed his footballing skills in a total of fifty games beating the opponents' defense on 16 incidents. In 2013, he moved to Germany to play for Bayer Leverkusen. Before being loaned out to VfR Aalen, Pohjanpalo scored seven times for the Die Werkself appearing in 20 of their competitive matches. He next started to play for Fortuna Dusseldorf in 2014. After scoring 13 goals in 55 games for the North Rhine side, he signed with Hamburger SV in 2020.

The six-foot-one finisher would play in 14 of their games and score 9 goals before moving to yet another club, Union Berlin in the middle of the 2019-20 season. Since he arrived at the capital, Pohjanpalo has netted six goals across 19 appearances.

He made his Finland national team debut on November 14, 2012, in a 3-0 victory versus Cyprus replacing Teemu Pukki as a substitute in the second half. On June 12, 2021, he was the sole goal scorer in Finland's shocking win over Denmark at the Euro 2020.

Bundesliga rarely makes headlines when it comes to record-breaking signings or tremendous salaries offered to a player at a given team. It though can easily stand among top paid players that we usually see in Spain, France, England, and Italy. The top-flight competition in Germany spends around $1 billion exclusively on players' wages and has maintained a fair pay gap between its elite and otherwise less popular footballers. 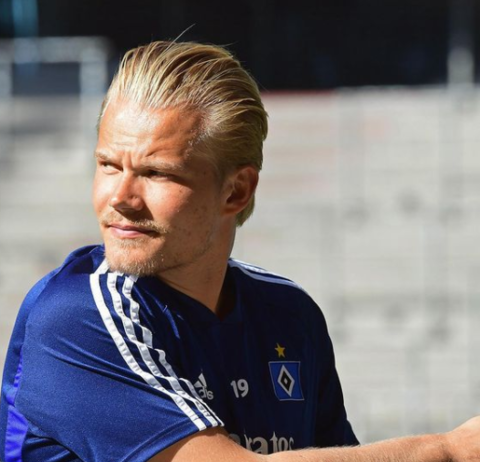 Internationally, Joel Pohjanpalo has made over thirty appearances, including playing in matches for the 2018 and 2022 FIFA World Cup qualifications. SOURCE: Instagram

Although the Finnish marksman is yet to hit a seven-figure salary, at least in terms of the European currency, he is reported to have traversed over six and a half million dollars in career earnings - mostly being rewarded to him in the form of salaries via the German teams since 2014.

With VfR Aalen, he was reported to have made close to $50,000. Leverkusen became the first team to provide him with annual pay equaled to almost half a million dollars.

It, however, remains to be known if the figure is entirely or partially paid by the Union Berlin or the Werkself. Having discussed the aforementioned maths, Pohjanpalo's net worth could be sprawling between $500,000 to $1 million.

Pohjanpalo is presently in a relationship with Catha Gericke. People outside the forward's circle first got to see her on May 31, 2018 - with the Finnish striker himself sharing her picture on his Insta. 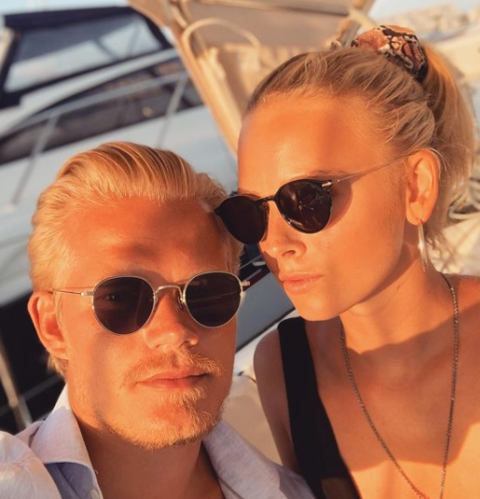 Though, at the time, the Finnis forward didn't tell what actually was going between him and the then mysterious woman. Her second appearance on the Scandinavian's Instagram strongly portrayed the fact that she was more than just a random girl for Berlin's number nine. 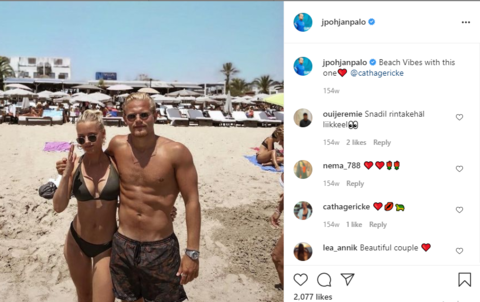 The duo, thereafter, kept on developing their love through each of their socials - either posting the pictures of their dating anniversary or their honeymoon-Esque holidays.