Jessica Melena is known for being the wife of an Italian football player Ciro Immobile, who plays as a striker for the Serie A team, SS Lazio.

Melena was born on July 17, 1990, in Bucchianico, a small village in the province of Chieti, Italy. Besides being the better half of the Italian striker, she is also a mother of three children.

Jessica Melena's Relationship With Ciro Immobile; Are they Married?

Melena married the former European Golden Shoe winner, Ciro Immobile on May 23, 2014, in her birth city, Buccianico, Italy. The future husband and wife first met each other in 2012 at a restaurant when Ciro was on loan at Serie B club, Pescara. About a week later, the duo was living together and Melena became pregnant with their first child, a daughter six months later. 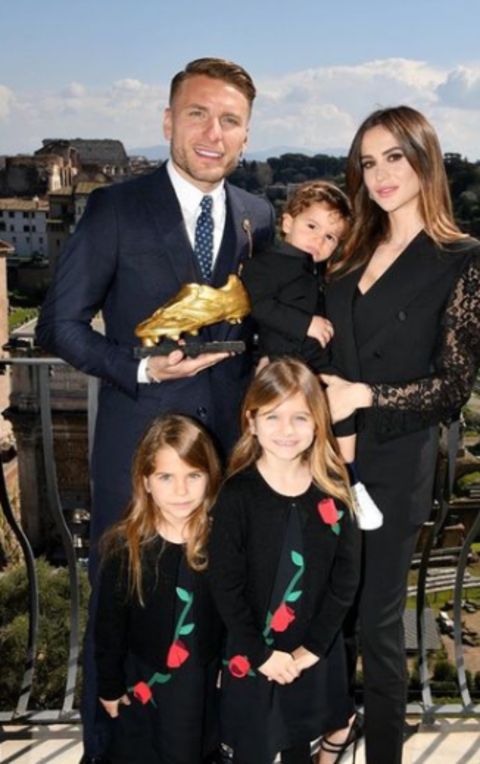 Jessica Melena with her husband and children SOURCE: Instagram

Jessica revealed the Italian frontman had told her that she would become the mother of his child on the third day of their first date through a text message. Amidst the beginning phase of their relationship, Melena had aspirations of working in crime scene investigations and had consequently studied criminology and forensic sciences at the University of L'Aquila.

She though had to ditch her studies in part to her pregnancy with her husband. Together, they share three children, Michela (born 2013), Giorgia (2015), and Mattia (2019).

Jessica Melena's Net Worth and Career

As for now, Melena seems to have refrained from going into a venture or delve herself into a corporate job and is rather committed to being a full-time wife and a mother. And although she boasts close to million followers on her Instagram account, she is yet to be seen cashing out from that edge.

It has been a mystery to the question - if she is even making her own money or just enjoying family life with Lazio's talisman. Jessica Melena enjoys being a wife and a mother to Ciro Immobile and their three children SOURCE: Instagram

Also Read: The time when Cristiano Ronaldo was accused of cheating on his girlfriend, Georgina Rodriguez

Melena, though, in the past was seen promoting few or two products through her Instagram, yet, the information regarding how much she benefited from those doings remains nothing but a closed book. Her net worth resultantly holds trivial importance among the public's attention and subsequently, is anybody's guess.

Sources report, prior to being Mrs. Immobile, Melena was participating in several beauty pageants and was even the winner of Miss Mediterranean in 2009. She had also earned the headband of Miss Peugeot in 2011 and was featured on the small screen, especially in a regional docu-reality show, Le Capitaine, for Spike TV. She is likewise alleged of having studied rhythmic gymnastics and dancing during her high school.