Ciro Immobile is an Italian professional footballer who plays as a forward for the Italian team, Lazio, and the Italian national team. He has won each of DFL Supercup, Coppa Italia, and two Supercopa Italiana. He was the winner of Serie A Best Forward (2019-20).

Immobile is regarded as one of the most pricy strikers in Europe. Even before the start of his pro career, he was costing clubs amounts equivalent to five figures. The former Serie B player of the year had analysts turned their heads in part to his million-dollar deals despite his inability to secure a starting position in any of his early teams. 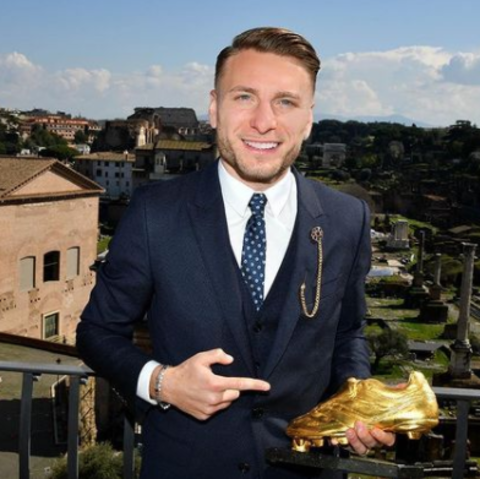 Ciro Immobile made his debut for the Italian national team in 2014 and was included in the squad for the 2014 FIFA World Cup, UEFA Euro 2016, and UEFA Euro 2020. SOURCE: Instagram

Notwithstanding his instability, he was receiving millions of salaries. Playing for Torino, he was pocketing around £1.3 million a year while his move to Germany secured him an annual compensation worth £2.34 million.

During his stay in Spain, he was being remunerated with a stipend worth £1.76 million. The figure tripled when he signed with the Eagles in 2017. For the first season, he was settled for a yearly salary of £3.276 million.

By the start of the 2018-19 season, he was cashing in weekly payouts up to £81,000. His current salary with Lazio is reported to be in the frame of £6.76 million. Since 2014, Salary Sport claims Immobile has grossed £22 million in career earnings with its net worth lying somewhere between £10 to £12 million.

Serie A striker for Inter Milan, Romelu Lukaku Net Worth And Married Life

Immobile is married to Jessica Melena. His wife was born in Bucchiano, a village in the province of Chieti on July 17, 1990. The European Golden Shoe winner (2019) married Melena in 2014 in Buccianico. Together, they share two daughters and a son. The pair first bumped into each other in 2012 at a restaurant when Ciro was on loan at Serie B Pescara. Within a week they were living together and Melena became pregnant with their first daughter six months later. Melena revealed the Italian striker had told her that she would become the mother of his child on the third day after their first date through a text message.

During the early phase of their relationship, future Mrs. Immobile had aspirations of working in crime scene investigations and consequently studied criminology and forensic sciences at the University of L'Aquila. She though couldn't compete her studies owing to her pregnancy with Immobile.

Immobile signed with Juventus at the age of 18 after the 2008-09 season. He played 3 games with the Bianconeri from 2009 to 2012. He was loaned to the Siena by the Old Lady in 2010. For the Robur, he made 4 appearances and scored one goal before being transferred to Grosseto in 2011. He made 16 occurrences for the Tuscany side scoring on one incident.

Before the start of the 2011-12 season, he moved to Pescara and by the end of the campaign, he was Serie B's top scorer with a total of 28 goals in 37 appearances. He then spent the 2012-13 season with Genoa and went on to sport their shirt in 33 games whilst scoring 5 goals. In 2013 Immobile signed with Juventus' city rival, Torino for whom he would make 33 appearances while finding the net on 22 instances.

On June 2, 2014, the German team, Borussia Dortmund confirmed the signing of Immobile. Two months later, he made his official debut for Dortmund in the starting lineup for the 2014 DFL Supercup against Bayern Munich.

He became an integral factor in the game that saw the BVB lifting the cup by the score of 2-0. For the Germans, he contributed a total of 3 goals in 24 appearances. After the conclusion of the season 2014-15, he started to play for the Spanish club, Sevilla. He made 8 appearances and 2 goals for the Los Palanganas. During the mid-2015-16 season, he returned to Torino and registered five goals in 14 advents.