Gossip Is Jeremy Lin Presently Dating Someone or Married: His Family Life and Dating Rumors

Is Jeremy Lin Presently Dating Someone or Married: His Family Life and Dating Rumors

Globally crazed for his nickname Linsanity, the 32-year-old American professional basketballer Jeremy Lin currently plays for the Brooklyn Nets in the NBA. Alongside his successful career and net worth of $16 million, Jeremy's relationship status has grabbed a  lot of attention too.

Well, the relationship rumor is not a new thing for the NBA player, but seldom the rumors are proved right. So, is Jeremy Lin really dating someone or taking his relationship further, is he married? Let's know the truth of Jeremy Lin's relationship, dating, rumors, and about his family as well.

Famed for making all the girl fans crazy and hopeful with his single relationship status, Jeremy Lin is fond of keeping the detail of his love life quite low. And talking about the marriage rumors of Jeremy Lin, till now no strong proof of Jeremy's wedding is out yet unlike his fellow NBA star Stephen Curry and LeBron James' happy married with their wives.

So, probably the handsome hunk blessed with the annual salary of $12.5 million, is dating someone then. But, seems it's not like as assumed, yeah Jeremy is not reported to be dating officially.

Good news for ya girls!

As reported, Jeremy is a devotee Christian and has often made the highlights regarding his intimate relationship with God. Back in 2012 with NY Post, Jeremy even made announced the qualities of his ideal girlfriend.

"First she would really love God and be a faithful Christian, and then after that, I think, a desire to serve other people, to help with the underprivileged, do a lot of social work . . . great personality and easy to be around. Someone that's definitely chill, low key, low maintenance."

Also, in 2015, in his Asia tour, Jeremy was asked about his plans for marriage by fans, and he replied:

"This will be God's arrangement."

Though, seems his arrangement is not done yet, as he is reported to be unmarried. Get your fingers crossed girls!!

However, everything we hear or see is not the truth always, and in the case of a celebrity, it gets even more intensive. Though, Jeremy is not reported to be in a love relationship officially, who knows he might be dating someone behind the eye of the media.

Surely time will reveal everything, hope the day is not far.

Past Relationship of Jeremy Lin (Affair and Girlfriends)

It seems Jeremy is not a fresher in a love relationship, as he holds the record of dating someone special in the past. In 2012, Jeremy's former Harvard University basketball teammate and friend, Alek Blankenau told the GQ that he once has a devout girlfriend in college.

Alek even mentioned a funny part of Lin's relationship too, that he forgot to make reservations for Valentine's day as per his statement:

"Jeremy forgot to make reservations on Valentine's Day once and had to save the day with some homemade chicken parm. He's not much of a guy to cook things, so his roommates helped out and put a pretty nice meal together by the time it was all done." 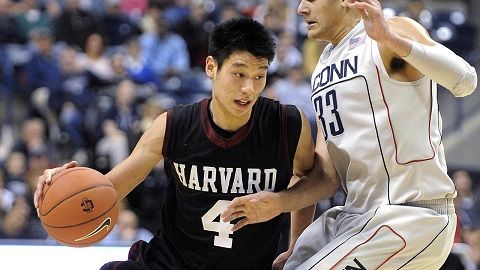 Funny though, that's how it defines friendship.

But sadly the detail of Lin's former girlfriend is not out yet, furthermore, he doesn't have any other past affairs besides this.

Touch up with rumors is not a new thing to Jeremy Lin. The famous basketballer has been linked with many names, however, all proved to be hoax later. Well, once there was a rumor of Jeremy and television personality Kim Kardashian's upgoing relationship. Later, it was given a dead shot by Jeremy after he denied his dating issues with Kim. 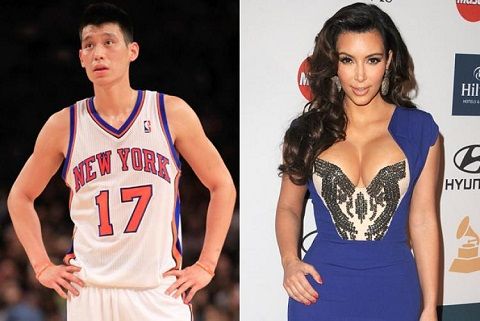 Jeremy Lin alleged to be in a relationship with Kim Kar SOURCE: NY Daily

In 2013, Jeremy's fan got shocked with the news of Jeremy's marriage at the premiere of the documentary film Linsanity in LA. Though it was not true at all, as Lin's fan Kristina Wong married Jeremy's life-sized cardboard cut-out.

Jeremy really is the dream boy of many.

Let's see in the near future, who is the lucky one.

Jeremy Lin was born to his Taiwanese emigrated parents Lin Gie-Ming and Shirley Lin who moved to the United States in the mid-1970. Jeremy has 2 brothers: Joseph, a former player for the Fubon Braves, and Josh, who was a dental student at New York University.

Check out this video, Jeremy going 1-on-1 with his brother Joseph.

The family guy Jeremy often can be sharing some lovely family moments on his Instagram. Have a look.

Parents in town so we had to get that seafood!! My moms so scared of the ???? lol! ??????????#yestheykilledthecrab #mydadsundies #peepthebeltthough

#tbt to when I fainted from illness and as always, MaMa had my back. S/o to all the strong mothers out there! ????????? #teamshirshir #foreverindebt #mamasboy

We wish the happy family a lot more happiness!

Know more:  Net worth and Salary of Jeremy Lin