Jeffrey William “Jeff” Van Gundy, well-known as Jeff Van Gundy become one of the most recognizable voices in the NBA. Gundy is an American basketball coach and TV analyst. Moreover, he also works as a color analyst for ESPN.com. Previously, Gundy served as the head coach for the New York Knicks and Houston Rockets.

NBA All-Star Game head coach, Gundy was born on January 19, 1962, in Hemet, California. He is of American nationality and is of white ethnicity.

Jeff Van Gundy has a whopping net worth of $16 million. Not to mention, he is one of the most respected names in the world of basketball. 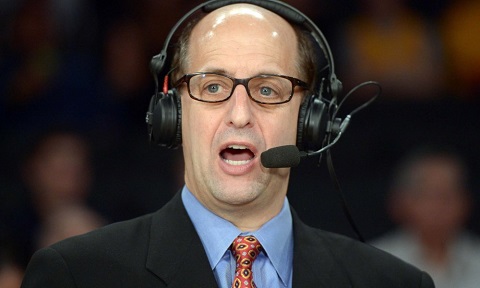 From 1986 to 1989, he served as an assistant coach for the NCAA division team, earning the six-digit figure per annum as salary. Further, he served for the NBA team, New York Knicks as an assistant coach from 1989 to 1996 later promoted to head coach and served until 2001. Then, he coached Houston Rockets (2003-2007), earning millions of dollars. Since 2017, he is serving as a head coach to the US national team, where his salary is believed to be no less than $1 million per annum.

In addition, he also served as the TV analyst and commentator for ESPN. He has accumulated a huge amount of wealth throughout his career.

Gundy married his long-term girlfriend Kim Van Gundy after having an affair with her.

Being knotted with Kim, the couple is blessed with two children named Mattie Van Gundy and Grayson Van Gundy.

Gundy has not mentioned the romantic parts of his personal life, how he met Kim, their first date, and the marriage celebration is still a mystery for his fans.

Normally popular celebs and people of media surrounded by several gossips and rumors regarding their affair and relationship. However, he maintained a clean image. In addition, there is no rumor about her previous affair.

Gundy is a philanthropist. He worked as an executive board member of Pro-Vision, a Houston Charter School that provides free educational and job training to boys and girls aged 10-18.

Gundy raised in the town of Martinez, California. He is the son of Bill Van Gundy, who was a former head coach at Brockport State University and at Genesee Community College. His older brother Stan Van Gundy is also a professional basketball coach.

Gundy attended Brockport Central High School in Brockport New York, where he played basketball for his school team. Upon high school graduation, He went to Yale University before shifting to Menlo and eventually he graduated in 1985 from Nazareth College.

On June 11, 2003, Gundy became the 10th head coach for the Houston Rockets. In three seasons, he led the Rockets to a 130-116 record, as winning percentage of .528 is the third-highest of any coach in the history of Rockets.

In July 2017, Van Gundy appointed as the coach for the United States men’s national basketball team. It is his first coaching job since leaving the Rockets in 2007.

Gundy successfully established himself in the world of broadcasting. Since 2007, he served as a color commentator for ESPN.