Jarrett Hurd is a well-known American professional boxer. He has been fighting in professional matches since 2012. Jarrett is ranked as the world's second-best active light middleweight by several top sports magazines. Hurd is the former unified light middleweight world champion and also was the WBA(Super) IBF and IBO Titles between 2017 and 2019.

Jarrett Hurd was born on August 31, 1990, in Accokeek, Maryland. He is the son of Fred Hurd Sr and his wife. Hurd rose to fame only after his successful career so, much information about his early life is under the radar. He graduated from Gwynn Park High School. Jarrett stands six feet and one inch tall and weighs 70 kg.

Jarrett started training boxing from a very early age. He completed his amateur career with 32-8 record in 40 amateur fights. Hurd made his pro debut on September 2012 against Mike Arnold. He won the match in the first round via TKO. He fought in three matches in 2012 and won all of them. In 2013, Hurd fought in seven matches and won all of them.

Hurd won all of his matches until 2016. In February 2017, Jarrett got his first chance for the vacant IBF light middleweight title against Tony Harrison. He won the match in the ninth round via TKO. In the  next match, Jarrett retained the title against Austin Trout. In April 2018, The American fighter retained his title and won the WBA(Super) and IBO light middleweight titles against Erislandy Lara.

Career Earnings, Net Worth and Sponsors 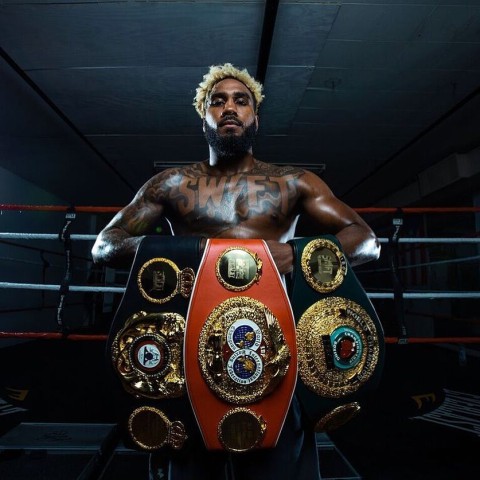 Jarrett along with his titles SOURCE: [email protected]_jarretthurd

In 2018, Jarrett's earnings increased to $500,000 from his match against Erislandy Lara. His opponent took home $1 Milion from the match. In June 2018, Hurd's earning increased to $1 Million fro hia match against Welborn. He must be receiving a handsome amount through his sponsorship and advertising deals.

Jarrett is an active social media user. His timeline is filled with photos of his family, his trianigs, and his games. As per sources, Hurd is dating his longtime girlfriend. However, He has not a  word about his love life to the public. They have been together since their early 20s. After the death of his father, Jarrett moved to his girlfriends apartment.

Jarrett might be waiting for the right time to open about his girlfriend in the public. He has become successful in keeping his personal life away from the spotlight.