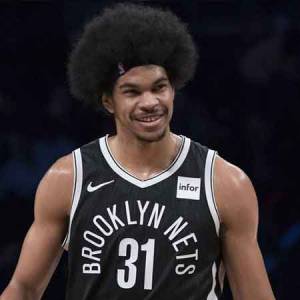 Jarrett Allen is an American professional basketball player who plays in the National Basketball Association (NBA). As of 2019, Jarrett Allen currently plays for the Brooklyn Nets as their Center.

As a Center, Jarrett reportedly earns around $2,034,120 as his annual salary from Brooklyn Nets and including the net worth of around $2 million. Allen is currently dating girlfriend Jordyn January.

Jarrett Allen's Net Worth and Salary

His projected salary is tabulated below.

I scream, you scream, we all scream... #icecreamparty

One of the highest-paid athlete for Brooklyn Nets is Allen Crabbe with an annual salary of $18,708,125.

Allen is currently in a relationship with Jordyn January. Jarrett Allen is not only a world-class athlete but also has a very attractive individual. The Famous NBA star Jarrett is 6 feet 11 inch in height and weighs around 108 kilograms and 237 lbs

Happy 21st Birthday @jorjan34! A whole day isn't enough to celebrate how special you are!! I love you!

Allen's family also plays basketball; his father Leonard was drafted by the Dallas Mavericks in the NBA draft of 1985 and played in the State of San Diego and in Spain and his brother Leonardo Jr. plays college basketball.

Other than being a famous NBA Center, Jarrett is pretty famous in social media. He has 49.8 thousand followers on Instagram and 12.4 thousand on Twitter.

Allen was born on April 21, 1998, in San Diego, California to parents Leonard Allen and Cheryl Allen. Moreover, he belongs to the Afro-American ethnic group and American nationality. His star sign is Taurus.

Jarrett studied at St. Stephen's Episcopal School in Austin, Texas where he played for his high school basketball team. Later Allen enrolled at the University of Texas and averaged 13.4 points and 8.4 rebounds per game. He scored 22-points, 19-rebound against Kansas in his University game.

Brooklyn Nets selected Allen with the 22nd overall pick in the 2017 NBA Draft and signed a contract on July 20. Jarrett is the second youngest player for the Brooklyn Nets as he debuted at the age of 19 years 182 days. Some of his teammates from Brooklyn are Treveon Graham, Joe Harris, and D'Angelo Russell

Allen joined the starting lineup on 25 January 2018 for the first time and records a career high of 16 points and 12 rebounds in a 116-108 win over the Philadelphia 76ers.

In the meantime, he scored career-high 20 points and 5 rebounds against Los Angeles Lakers. Later he recorded 4 blocks, 6 rebounds, and 9 points in a 111-105 loss to Charlotte Hornets.