Jared Butler is an Ameican college basketball player who is currently reprsenting the Baylor Bears of the Big 12 Conference. Named 98th-best collegiate basketball player going into the 2019-20 season, he declared for the 2020 NBA Draft.

Reserve, Louisiana native, Jared Butler was born on 25th August 2000, under the star sign Virgo. The nineteen years old, he is an American nationality and is of white ethnic background.

Baylor University sophomore guard, Jared Butler has declared for the 2020 NBA Draft. He is retaining his ability to return to Baylor throughout the pre-draft process. As a full-time starter as a sophomore, he averaged 16 points, 3.2 rebounds, and 3.1 assists per game.

Most NBA draft analysts have Butler rated as a mid-second round pick. Moreover, he got good size for the point guard position at 6’3’’. Not to mention, he is a solid defender and good scorer. 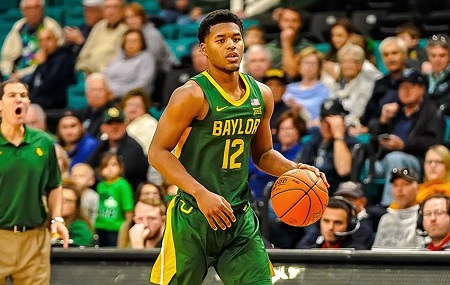 CBS Sports has ranked Jared Butler 56th Prospect behind Reggie Perry, Jordan Nwore, and Udoka Azubuike. If he goes pick in the upcoming draft as suspected, the hunk would earn million in salary. Reportedly, the 56th will have a contract of  4 years / $6,129,593 with an annual average salary of $1,532,398.

Jared Butler's Personal Life: Who Is His Girlfriend?

No. 12 – Baylor Bears' shooting guard, Jared Butler seems to be single. There is no story to be displayed regarding Butler's love life: affair, girlfriend, hook-up, or break-up.

As he has declared for the upcoming NBA draft, the hunk is fully concentrated on his career rather than anything else. Regarding his physique, he stands 6 ft 3 in (1.91 m) tall and weighs 190 lb (86 kg).

Jared is the son of Richard Butler and Juanea Butler. After turning 11, Jared was competing in out-of-state basketball tournaments.

He enrolled at Riverside Academy, where he joined the school's varsity basketball team as an eighth-grader. As a junior, he averaged 20.4 points and 6.7 assists and averaged 27.4 points, 8.8 rebounds, 8.4 assists, and 3.0 steals during his senior season. Further, he was rated a four-star prospect, and committed to play college basketball at Alabama over offers from Virginia and Baylor.

Though Butler attended Alabama, he did not participate in the team's summer workouts and requested an unconditional release from his letter of intent in order to transfer to Baylor University. Luckily, he had a scholarship at Baylor due to the early retirement of Jake Lindsey. For now, he has not decided to major.