Katie Osborne is an American television reporter & host based in Los Angeles, California. She serves for the Spike TV program entitled “PowerNation TV,” which features various topics regarding automobiles. She also reports for other sports networks such as CBS Sports and NBC Sports, often handling racing-related programs, including “Mecum Car Auctions,” “Snocross,” and “The Off-Road Championship” (TORC).

Indianapolis, Indiana native, Katie Osborne, was born on 30th July 1982, under the star sign Leo. She holds an American nationality and belongs to a white ethnic background. She stands 5 feet 9 inches tall and weighs 54 Kg.

Katie Osborne has been into sports journalism for a very long time. With her hard work and dedication, she has to only earn name but also tremendous fortune for herself. As of 2020, her net worth is approximately $1 million.

Currently, she is employed as a reporter at NBC Sports and Pit reporter for Fox Sports. According to the source, the average annual pay for a Sports Reporter in the United States is $51,018 a year, while the source is seeing annual salaries as high as $149,500 and as low as $17,500. Since Osborne has been into the field for a very long time, she is assumed to make no less than $100,000 per annum as salary.

Besides, there are no other records of her financial aspects.

Katie's personal life is a puzzle to solve. Some source claims, the NBC reporter is dating an American professional racing driver and television host, Tammer Foust, who has one daughter. Foust often features his adorable daughter on his official socials but not Katie. They have met for interview and later some of their pictures were out in the media which created a buzz. 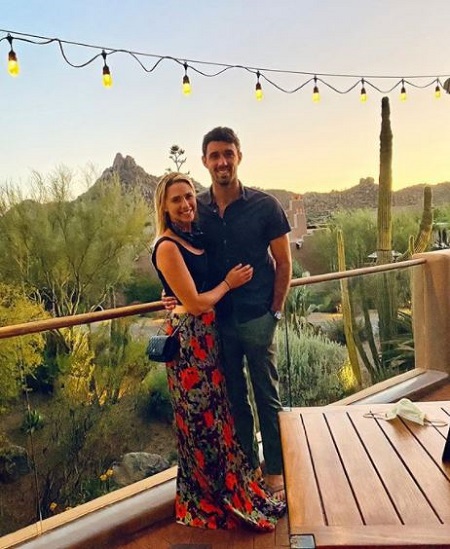 In the same manner, scrolling through Katie's Instagram we find she posting lots and lots of pictures with a man named, Paul Wadensweiler, rather than Tammer Foust. It is still unclear, who Katie is dating or is she single.

Born and raised in Indianapolis, Indiana, Katie Osborne was a competitive swimmer on a national level in her youth. Upon her high school graduation, she enrolled at the University of Iowa for a year before transferring to the University of Indiana, Bloomington. An active student, she, was a sister in Kappa Alpha Theta. In 2010, she graduated with a Degree in Sport communication - Broadcasting.

Katie started her career as a client service intern for the Indianapolis Motor Speedway. Later she worked for Nike, Chick-fil-A, and WISH-TV Channel 8. Further, she became a host and reporter for various sports and teams, including the Indianapolis Colts, Indiana Pacers, INDYCAR, Columbus Blue Jackets, and Indianapolis Indians.

She has played a role in hosting events on channels and organizations such as Fox Sports, ESPN, NBC Sports, CBS Sports, NHL, NFL, and X Games. Currently, she is hosting PowerNationTV on Spike TV, NBC Sports, and CBS Sports. Also, she is a reporter for Mecum Dealmakers, Snocross, and The Off-Road Championship.