James Akinjo is a rising American college basketball player. He is currently playing in the Big 12 Conference for the Baylor Bears. James was named in Big East All-Freshman Team and won the Big East Freshman of the Year in 2019. Akinjo plays as a Point Guard for his college team.

James Akinjo was born on November 27, 2000, in Oakland, California. He is the son of James Akinjo Sr and his wife Monique Divers. His father was a basketball standout at McClymonds-Oakland in the late ’90s. James' mother passed away at the age of out after a long illness, and his grandmother, Roberta Stevenson, took custody. Akinjo graduated from Salesian College Prep School and enrolled at Georgetown University. Talking about his physical appearance, James stands six feet and one inch tall and weighs 86 kg.

James started playing basketball in middle school and featured in the East Bay Times, who touted him as a "basketball prodigy " at eleven. Akinjo averaged 20.7 points and 5.2 assists per game in his senior year and led his team to a 30–2 record and the CIF North Coast Section Division III title. After graduating from High School, He initially committed to play for the University of Connecticut but later moved to Georgetown University. 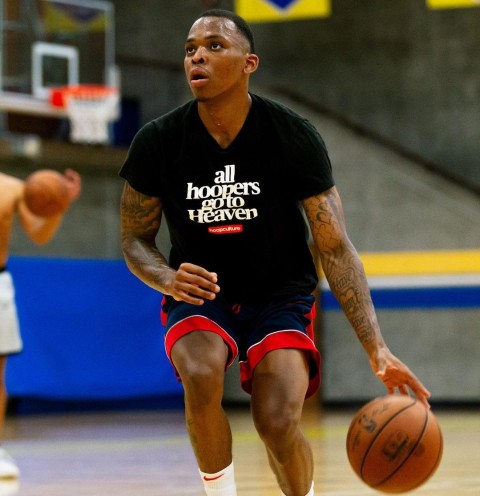 : James tries to take a shot in a practice game SOURCE: [email protected]

James won the Big East Conference Freshman of the Week honors within the first few weeks, averaging 14.3 points and 4.7 assists per game in three games. He ended his freshman year averaging 13.4 points, 5.2 assists, 2.9 rebounds and 1.1 steals per game. Akinjo played just seven games in his sophomore year and averaged 13.4 points, 4.4 assists, and three rebounds per game. James transferred to the University of Arizona for his junior year and averaged 15.6 points and 5.4 assists per game, earning First Team All-Pac-12 honors.

For his senior year, James declared his name for the 2021 NBA draft and, with the possibility of returning to school, transferred to Baylor University.

James has successfully kept his personal life away from the spotlight. Although He is an active social media user and shares photos of his games, training, and vacations, there is no single post about his love life. Akinjo is believed to be single as of 2021. He might be focusing on making a good career and starting his love life. The player is very close to his father and grandmother and spends his free time with them.

Know About His Earnings, Salary and Net Worth

James has not started his professional career and does not possess any form of assets under his name. As per the NCAA rules, the college athlete is not allowed to be paid in cash. However, the universities offer athletes scholarships that will help them cover most of their college expenses. Last year draftee Cade Cunningham had an annual salary of $8,375,100, and Second pick Jalen Green's annual salary was $7,493,500.