Jalen Romande Green a.k.a. Jalen Green is an American professional basketball player who is currently signed to the NBA G League Ignite. He finished his high school career playing for the Prolific Prep. Though he was a consensus five-star recruit and the best shooting guard in the 2020 class, he chose to forgo college basketball to join the Ignite.

Merced, California native, Jalen Green was born on 9th February 2002, under the star sign Aquarius. The eighteen years old holds an American nationality and is of Afro-American ethnic background. Regarding his physique, he stands 6 ft 6 in (1.98 m) and weighs 180 lb (82 kg).

1 High School Prospect, Jalen Green signed a contract with the G League on Thursday for more than $500,000. His contract features that even top recruits who have yet to play a college game are worth much more than a scholarship. The G League may not pay any other players $0.5 million, but maybe they can get something between that figure and the $125,000.

This season, Green will earn a base salary of $0.5 million: over $1 million total, with endorsements and appearance fees, factored in.

Intially, Jaken Green played basketball for San Joaquin Memorial High School for his first three years of high school. Later, he transferred to Prolific Prep in Napa, California for his senior year. He was named Sports Illustrated All-American player of the year and to the MaxPreps All-American first team.

Before turning 15 years, he received offers from many NCAA Division I basketball programs: USC, Arizona, and  Florida State. However, he announced that he would join the NBA G League, forgoing college basketball, on April 16, 2020.

Jalen Green was born to Bree Purganan, a nurse who is of part Filipino descent through her grandfather. Though there is no information available regarding Green's bio father, it came to know that his stepfather, Marcus Green, is a former basketball player and a teammate of NBA player DeShawn Stevenson at Washington Union High School in Fresno.

Green moved with his family to Fresno, California, when he was in 3rd grade. By sixth grade, he was playing Amateur Athletic Union basketball and practicing for five hours each day. 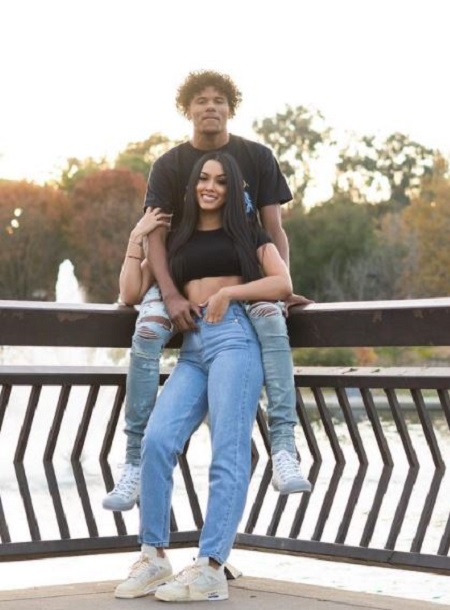 Camila has disclosed her relationship publically via her IG, posting pictures with Green: "My Person."