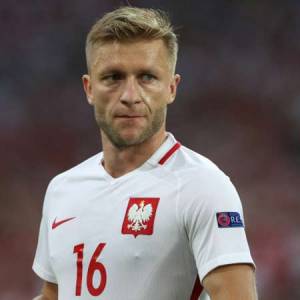 A Polish international football player, Jakub Blaszczykowski currently plays for German club VfL Wolfsburg as a winger and wears the jersey no. 16. Prior to this, he played for Fiorentina on loan from Borussia Dortmund and Wisla Krakow, having debuted professionally from KS Czestochowa.

Since 2006, Jakub is in the Poland national team and has been named Polish Footballer of the Year in 2008 and 2010. Let's take a look at his wiki to gain information about his career, early life, net worth, personal life, family and more.

A native of Truskolasy, Poland, Jakub Blaszczykowski was born on 14th of December 1985, to Anna Blaszczykowska and Zygmunt Blaszczykowski. Jakub’s birth sign is Sagittarius. Regarding his nationality, he is a Polish.

At the age of eight, Jakub started his football career with Rakow Czestochowa.

In his childhood, Jakub countersigned a family tragedy which had a major impact in his life. At his 10, his father stabbed his mother to death. After his father went to prison, Jakub and his older brother, Dawid, were raised by their grandmother.

After the incident, Jakub briefly gave up football. But his uncle, Jerzy Brzeczek, a former captain of the Polish national team, encouraged him and he decided to continue training at Rakow Czestochowa two months later. In 2002, he moved to Gornik Zabrze.

Jakub Blaszczykowski's Net Worth and Endorsement

Jakub Blaszczykowski presently gets paid $83,123 as his weekly salary i.e, $4.3 million in a year. His significant source of income is his club contract, salary from national as well as an endorsement with renowned brands including Puma.

Blaszczykowski's salary while in Dortmund was reported to be £2,640,000 in annually.

As of 2018, Jakub has an estimated net worth of around $20 million. He owns a house an in Dortmund, Germany. As per riding, he has Ferrari.

In early 2003, Jakub Blaszczykowski moved to KS Czestochowa and played in the Polish fourth league for one season. He played 24 league matches and managed to score 11 goals.

With the help of his Uncle, Jerzy Brzeczek, Jakub got a trail at Wista Krakow, where he impressed then-manager Werner Licka.

Jakub promptly broke into Wista’s senior squad, with his league debut match coming on 20th March 2005 against Polonia Warsaw. In his three seasons at Wisla, he earned Canal+’s “Football Oscar” for the best midfielder in the Polish top division and was also named to the Ekstraklasa Best XI of the 2006-07 season in the Polish Footballers’ Association voting. Adding up, he played overall 51 games for 3 goals.

In February 2007, Jakub joined Borussia Dortmund, signing a four-year contract. He appeared with the jersey name “Kuba”, a minute form of his first name, until 2012.

Again on 2nd June 2013, the player signed an extension contract with a club, keeping him until 2018. On 31st August 2015, Jakub joined Fiorentina, signing a  season-long loan deal. He played overall 15 matches and scored 2 goals for the Club.

For 2015-16, he returned to his parent club. Throughout his nine years career at Borussia Dortmund, Jakub played 197 matches for 27 goals. He has also earned various honors at the club including, 2008 Polish Footballer of the Year as well as shortlisted for the Best Player in Europe award.

On 1st August 2016, Jakub arrived at Germany club VFL Wolfsburg, signing a three-year contract for a fee of 5  million Euro.

Thus far, he has played 38 matches and scored a goal for his native club.

Jakub has played internationally for Poland national team at various youth level and senior level. He was a part of Poland U19 and U21 national team.

On 28th March 2006, Jakub made his international debut for Poland in a friendly against Saudi Arabia. His first goal for his national side came on 22nd August 2007, in a friendly match against Russia.

Similarly, he scored 2 goals for his national team in UEFA Euro 2016 against Ukraine and Switzerland.

On 5th October 2017, Jakub played against Armenia alongside his teammates Lukasz Fabianski, Maciej Rybus, and Piotr Zielinski, for the 2018 FIFA World Cup qualification where he scored a goal, which resulted in 6-1.

Thus far, he has earned 103 caps and scored 21 goals for Poland national team.

At 32, Jakub Blaszczykowski is a married man. He tied the wedding knot with his longtime girlfriend Agata Golaszewska in June 2010. The couple welcomed their first child, Oliwia in 2011. Two years later, they became proud parents for the second time following the birth of their second daughter, Lena.

A post shared by Kuba Blaszczykowski Official (@kuba.blaszczykowski) on Dec 31, 2016 at 3:57pm PST

As of now, he is living a blissful married life without any news and rumors regarding extra-marital affairs, conflict, and divorce.

Besides, Jakub has credited his successes to his grandmother who raised him after the death of his mother. He dedicates every goal to his mother.