Isaiah Stewart is an American basketball player who finished collegiate career playing for the Washington Huskies. He enrolled at McQuaid Jesuit High School in his first two seasons of high school and later transferred to La Lumiere School. He completed his high school career as a consensus five-star recruit and top-five player in the 2019 class.

Rochester, New York native, Isaiah Stewart, was born on May 22 2001, under the star sign Gemini. Further, he holds an American nationality and belongs to the Afro-American ethnic background. The eighteen years old, listed at 6 feet 9 inches (2.06 m) and 250 pounds (113 kg).

University of Washington freshman Isaiah Stewart has declared for the upcoming NBA Draft. Though the power forward can test the waters while maintaining his remaining college eligibility, Stewart sounds prepared to go professional, telling Givony he will sign with Roc Nation for representation. 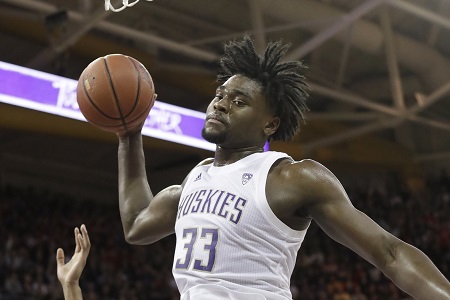 Moreover, the big man averaged 17.0 PPG, 8.8 RPG, and 2.1 BPG in 32 games (32.2 MPG) for the Huskies. For now, he projects as a potential first-round pick, ranking 26th overall on ESPN's big board of 2020 prospects. Also, he is placed third among centers, behind probable lottery selections James Wiseman and Onyeka Okongwu by the ESPN.

Projected Salary for the 26th pick:

A potential first-round pick, Isaiah Stewart is currently focused on his career rather than involving in a romantic relationship. He is believed to be single. Or his love life may have the other side, but he let his fan know only about his profession, not his personal things.

Besides, the hunk is active on Instagram with 54.6k followers, where he has shared only 14 pictures, which are all from basketball.

Isaiah Stewart's father, Dela Stewart, was born in Jamaica, who later emigrated to the United States in the early 1970s for farm work. Later on, he relocated to New York, where he met Isaiah's mother, Shameka Holloway, and started working in construction.

Grew up playing soccer and boxing, Isaiah Stewart started and focused on basketball in fifth grade, which he was drawn to due to his physique and athleticism. By 10, he started playing organized basketball while enrolling at elementary school in Rochester. He attended McQuaid Jesuit High School in his first two years of high school.

Later he switched to La Lumiere School in his junior year, where he finished his high school career as a consensus five-star recruit as well as the top-five player in the 2019 class. On January 21, 2019, he committed to play college basketball for the University of Washington.