Is Reporter Kacie McDonnell Dating a Boyfriend? Find her Relationship

The reporter of NESN located in Boston, Kacie McDonnell has piqued the interest of many people and it is not just because of the stories that she covers. While it is normal to be interested in what an anchor of a television channel has to say, it is not the same case with Kacie.

It is the dating life of Kacie that has the interest of the people. The anchor who is a beauty with an attractive feature and an equally bright smile has the world going crazy to know if this reporter is currently in a relationship.

Is Kacie Dating Someone?

That may be the question that many people have in their head when they see her on the television. And, the answer to the question is yes, she is in a relationship at the moment. Her boyfriend in question is Eric Hosmer; an American professional baseball who is the first baseman for the San Diego Padres.

She has been seeing Hosmer since 2015. The couple opened up about their relationship to the public in the summer of 2015 with various pictures of them together. During that time, Kacie was a traffic reporter at Kansas City's Chanel 41.

It is not often that you get to see the couple together or see them posting of their pictures together. It shows that both Kacie and Hosmer are trying to keep their relationship on the down low and give too much information to the media and public. Since Kacie herself is a media personality, she must have a clear understanding of the drawbacks of having everything about their relationship being made public.

There is not enough information about how serious her relationship with Hosmer is but, the two have yet to be engaged and marriage looks to be a long shot down the line. We do hope that the two can make their relationship last and get married somewhere down the line.

Kacie is not new to dating high profile athletes. Prior to her relationship with her now boyfriend Hosmer, she used to be in a relationship with Christian Ponder who is the former Minnesota Vikings quarterback. She was dating Christian back in 2012 but their relationship could not last long. Christian has since then moved on and is currently married to an ESPN reporter Samantha Steele. 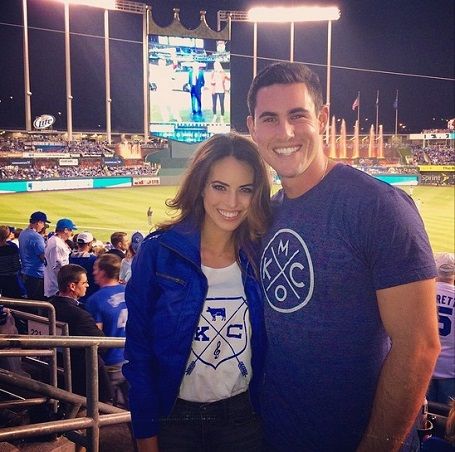 Kacie's luck with quarterbacks did not seem to have the happy ending but things may turn around different of her relationship with a professional baseball player.