Eric Hosmer is an American baseball player who plays as a first baseman for the San Diego Padres of Major League Baseball (MLB). Since making his MLB debut in 2011, he played for the Kansas City Royals until 2018.

Hosmer also played baseball at American Heritage School in Plantation, Florida. As of 2021, Eric Hosmer has a net worth of over $50 million. Eric Hosmer joined Padres in 2018 penning an 8-year, $144 million deal in 2018.

As of 2015, his salary was reportedly over $5.65 million. Maximum of his net worth is built through his professional career. His profiles can be seen on Twitter and Instagram.

Eric Hosmer is not married hence, he does not have a wife. Currently, he is dating Kacie McDonnell. 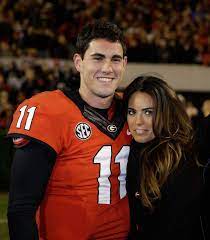 Kacie McDonnell works as a sports anchor on New England Sports Network. The couple made their relationship public in June 2015 while Kacie worked at Kansas City’s Channel 41 as a traffic reporter.

Eric Hosmer is the son of Mike and IIeana. His father is a retired firefighter and his mother is a Cuban-born nurse. His parents met while Mike and Ileana worked at Coral Gables Hospital in Coral Gables, Florida, and got married four years after they first met each other. He has an older brother, Mike Jr. Mike works as a stockbroker in Miami.

Eric Hosmer was born on October 24, 1989, in Copper City, Florida, United States. He is American by nationality and his ethnicity is white. Further, Hosmer's birth sign is Scorpio. He started playing baseball at an early age. He and his brother Mike have played college-level baseball but Mike chose to pursue a career as a stockbroker instead.

Eric's father, Mike Hosmer, is a retired firefighter, and his mother, Ileana, is a nurse they reportedly worked double shifts just to help Eric train harder and to be able to take care of his interest in Baseball. His family hired the best hitting teacher Bladimir Marrero who helped Eric gain a better striking ability.

As a teenager, Eric Hosmer was associated with several little leagues and when he went to American Heritage School, he already had significant wins registered in his resume. At Eric's Softmore year, Heritage was one of the top 10 teams enlisted by the USA Today and his name remained in USA Today's Super 25 rankings for most of the year with a state championship registered to American Heritage.

In his senior year, Eric held the record of .470 hits with 11 home runs. Several of his amateur home runs are still popular on YouTube.

He was honored by Baseball Player of the Year twice by the Miami Herald. For his performance, Arizona State University offered him a full baseball scholarship.

Upon completing his high school career, Eric Hosmer agreed on a six million contract with Kansas City Royals in 2008. Soon after his contract, he started his minor league with the Idaho Falls Chukars. He played 3 seasons as a player in the minor league.

In 2011, Eric Hosmer made his MLB debut against the Oakland Athletics. Since making his MLB debut for Kansas City Royals, he played outstandingly for his team.

The South Miami native Hosmer joined San Diego Padres signing an eight-year, $144 million worth contract in February 2018. He took jersey no. 30 in honor of former Royals teammate Yordano Ventura who passed away a year before.

Eric Hosmer is currently 29 years old. He is 6 foot 4 inches tall and weighs 226 lbs and he is a good friend of Mike Trout and Bryce Harper.