Aaron Rodgers is one of the biggest stars of NFL. In the year 2018, he landed the biggest contract in the history of the NFL and has achieved career high. There are no issues in his career life but how are things going in his love life?

Fans love the fact that Aaron Rodgers is together with Danica Patrick. There is also a large number of curious fan who wish to find out if the two have taken their relationship to the next level and gotten married.

To those fans, we have to say be patient because for now, the couple is still only boyfriend and girlfriend.

Last night was a night I will never forget. Not only because it was so fun, but because of the people it took to get there and who are always in my corner. Haley, Allison, mom, dad, Brooke, Chase, maura, Jeff, Bennett, and all the writers, Valdez, Jimmy..... and of course this one. It’s amazing when you find people you can lean on, and not worry about falling. Thank you. . Also, thank you to all of the other people who came to celebrate and show support! Kim, Jeff, Steph, Greg, Nate, Becca, Eric, Sarah, Lama T, Ed. Thank you. . Now what?!

Rodgers has yet to ask the question that would lead Patrick to be called his fiance and eventually his wife. It has not been long into their relationship which may be why both Rodgers and Patrick may want to take things slow for now.

Rumors of Aaron Rodgers dating Danica Patrick started to spread earlier this year. The rumors were only fueled when a picture of the two out on a dinner together was surfaced in the media.

Speaking to The Associated Press, Patrick confirmed of the relationship saying, "Yes, Aaron and I are dating." Patrick lives in Napa Valley while Rodgers is in Wisconsin, but still, the couple is making the relationship work.

Another incredible week at beautiful Lake Tahoe! Thanks to the @acchampionship for another amazing week and @nbcsports and @edgewoodtahoe for the fantastic course and coverage. Thanks to @eblofer for the reads, @officialajhawk for the jokes, @trayfour and @stephencurry30 for the fun on the course, and @danicapatrick for being a beautiful distraction when I started to play poorly. Thanks also to the great fans, especially Carol, and the few others who follow me so diligently every year all 3 rounds, you know who you are, and you are great people! Until next year... #americancenturychampionship #laketahoe #edgewoodtahoe #paddlebords #sunset ##

For now, things look to be going for the couple and we only hope that they can make their relationship work and get married eventually.

Aaron Rodgers is famous in the world of NFL but his girlfriend Danica Patrick is equally famous as well. She is a former professional racing driver and is also the most successful woman in the history of American open-wheel racing. She is the first woman to have won an IndyCar Series race, an achievement which she accomplished in 2008 Indy Japan 300.

It’s the Danica and Danika show!  Check me out on @danikabrysha light + life LIVE!!!!!! She is an inspiring woman that is making her way across the country with her husband talking about taking care of yourself inside and out! I reached out to her when I saw she was doing this, something really resonated with me. It’s called the #brunchseries. Check it out in a town near you! In the meantime listen in on this interview on Thursday night 5-6!

Danica was born on March 25, 1982, as Danica Sue Patrick. Her hometown is Beloit, Wisconsin in the U.S. She stands at the height of 5 feet 2 inches and weighs 45 kg. Although she and Aaron Rodgers had met each other in 2012 ESPY Awards, the two did not hit it off in their very first meeting. The reason for them not being in a relationship in the past was due to both of them being involved in a different relationship. 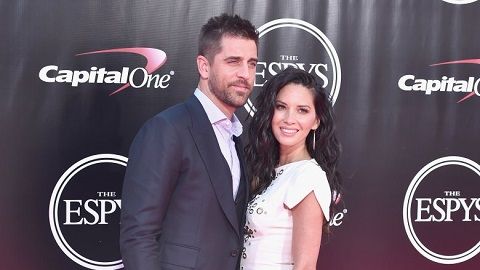 Danica was married to Paul Hospenthal in the past and after her divorce had started dating fellow NASCAR driver Richard Stenhouse Jr. While Danice was involved in other relationship, so was Rodgers. He was in a relationship with the Hollywood actress Olivia Munn.

What a week in Tahoe! So much fun in the sun with so many great people! I wish I could stay for the last day but it was nice to have this many days right before the #espys. Get it tomorrow love! ....4 solid days of prep coming up....and my tan is on point.

The two being in their individual relationship caused their relationship to be delayed. But, as the saying goes better late than never, Aaron Rodgers and Danica Patrick eventually got together and we have to say that the two of them really look good together.