All known about the veteran boxer, Hasim Rahim who competed professionally from 1994 to 2014. Today in this article we are going to talk about Rahman's son Hashin Rahman Jr. who is on Tyson's undercard and had a row with Floyd Mayweather. Jr made his debut in 2017, only three years after his dad's retirement.

Baltimore, Maryland native, Hasim Sharif was born on 15th June 1991, under the star sign Gemini. As per nationality, he is an American and is of Afro-American ethnic background.

It's been four years since Rahman Jr. has made his debut in the boxing world. In this short duration, he has achieved more in the field. As of 2020, his net worth is approximately $0.5 million. Not confirmed but he is estimated to make no less than the six-digit figure per fight.

On the other hand, Rahman Jr's father Rahman Sr has an estimated net worth of over $10 million as of 2020. He is one of the best-paid boxers during the boxing stint. Most notable, he pocked $10 million in 2001 in the fight against Lennox Lewis. Moreover, the fight generated 460,000 pay-per-view buys and $23 million in revenue. Another disclosed pay cheque of him was $4.2 million which he pursed in 2005: second world title and Vitali Klitschko fight cancellation.

Rahman Jr' father, Hasim Sharif Rahman is a retired boxer who was active from 1994-2014. He claimed world heavyweight champion two time, having held the unified WBC, IBF, IBO and lineal titles in 2001; and the WBC title again from 2005 to 2006. He got the spot light following his upset knockout victory against Lennox Lewis to win the unified heavyweight championship in 2001. The second time he won WBC was against Monte Barrett. 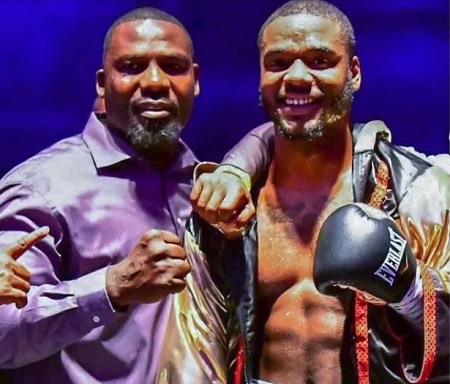 Going personal, Rahman Sr, met his future wife, Crystal Simpson, on a Sunday night in May, 1989, at a Denny's restaurant in Catonsville. Later the couple married and welcomed two sons, Hasim Jr., and Sharif, and daughter, Amirah. Further, Rahman also took in his nephew, Terry Frierson, whose father had died. Back in 2001, the family used to live in Abingdon in a two-story, $200,000 house.

On 14th April 2017, Hasim Rahman Jr. made his professional debut against Ralph Alecander. He won the fight via TKO in round 1. His second fight came on 8th DEcember 2018 where he defaeted Damion Reed via unanimous deceision.

Earlier, Rashad Coulter was scheduled to fight Viddal Riley, who withdrew with an undisclosed injury. Coulter had no issue with the switch in the opponent. Now, after Rahman Jr. tested positive with COVID-19, the bout is cancelled one more time. Considering the untimely news of the result, a backup opponent could not be sourced in time for Coulter.