Hany Mukhtar is a rising German-Sudanese professional football player. He is currently playing in Major League Soccer in the United States for the Nashville SC since 2020. Hany plays as a midfielder for his club and his country. Mukhtar started his professional career in 2012 with Hertha BSC.

Hany Mukhtar was born Hany Abubakr Mukhtar on March 21, 1995, in Berlin, Germany. He is among the two children born to Abubakr Mukhtar and his wife, Ursula. He has an elder brother. His mother is of German descent, and his father comes of Sudanese descent. Hany stands five feet and eight inches tall and weighs 72 kg.

Hany started training with FC Stern Marienfelde at the age of five. He moved to Hertha BSC youth club in 2002. Mukhtar spent his next decade playing for numerous divisions with the club. Hany captained the club's U-17 squad to a Championship title in 2012. The same year, The player got his first chance to represent the club at the senior level. Mukhtar became the second-youngest professional debutant in Hertha's history. 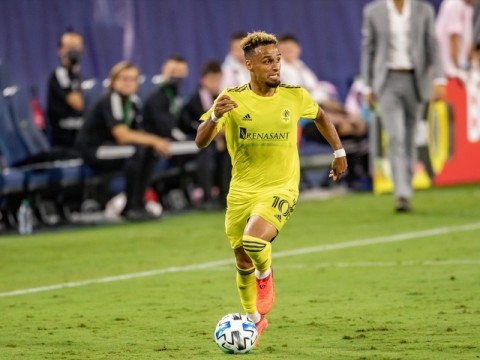 Hany moves the ball forward in an MLS game for Nashville SOURCE: MLS.

Hany represented Hertha in seventeen professional games until 2014 and then signed with Benfica. However, This deal did not last long, and then moved to Red Bull Salzburg for a season-long loan deal. The following season, The player moved to Brondby on a loan season. Mukhtar has a brilliant season with the club, and they exercised their option to sign Mukhtar permanently from Benfica. In 2018, Hany was awarded the Superliga Player of the Season and named on the Superligaen Team of the Year.

Hany is yet to make his senior team debut in terms of international matches. He has represented Germany from U15 till the U21 divisions. Mukhtar has appeared in more than fifty matches but is yet to play for the German National team.

How Rich is Hany Mukhtar? Know About His Salary and Net Worth

Hany Mukhtar has an estimated net worth of more than $2 Million. He has accumulated most of his net worth as his salary and contracts with the football clubs. As per sources, Hany joined Nashville SC in a $3 million transfer fee. Mukhtar is the highest-paid player for the club, with a base salary of $1,505,000. Hany is very much early in his career and shall be earning much more in the days.

Hany is an active social media user. His timeline is filled with his photos of games, training, friends, and family. Mukhtar has not shared a word about his girlfriend and love life in the media. In 2018, Hany was involved in a romantic relationship with a girl. He never opened about her. They were seen celebrating after winning the league cup in 2018. However, As of 2021, Hany could be single, dating, or engaged to some.