Haley Grissom is an NFL popular Wags who is married to LI Super Bowl champion, Geneo Grissom. Her husband, the former American football defensive end finished his collegiate career at the University of Oklahoma and was picked by the New England Patriots in the 3rd round with the 97th overall pick of the 2015 NFL Draft. Further, Geneo played for Indianapolis Colts (2018) and New Orleans Saints (2019).

During Geneo tenure as a player, Haley had been his cheerleader since long before he was in the NFL. A college sweetheart, when the duo tied the knot? Do they share children?

Haley met his future husband, Geneo Grissom at the University of Oklahoma around 2010. Her husband is Hutchinson, Kansas native-born on 4th June 1992 to Eugene and Erica Grissom

After dating for years, on 2014 Valentine's day, Geneo got down on one knee asking for a lifetime commitment. Of course, the answer was "YES". 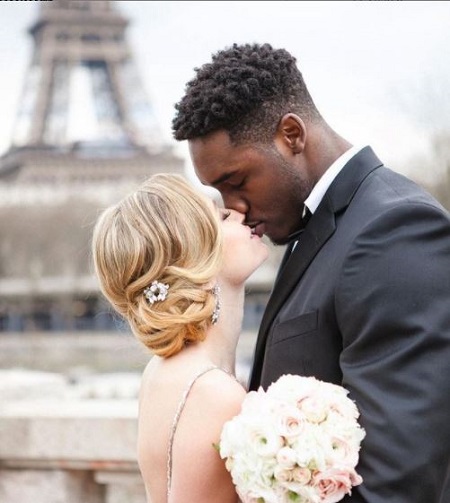 On 20th July 2015, the pair exchanged vows in a beautiful ceremony. The couple is parents to their four legs baby named Nyla.  Mr. and Mrs. Grissom is living a blissful life. It only takes a glance at their Instagram to see they are an adorable couple.

On 28th January 2021, they appeared in a reality show "House Hunters" episode "Wow Factor in Dallas". They were looking for a home in the Dallas area.

An attorney by profession, Haley is currently a patent Litigation Associate at Caldwell Cassady & Curry PC. Before, she worked at Nutter as a litigation junior associate (2019-2020). From August 2018 to December 2018, she was a student attorney at a Juvenile Rights Advocacy Project. Besides, she has also served at Dorchester Division Boston Municipal Court, Ketches Law Group, and JCPenney. As of 2021, her net worth is approximately $0.1 million.

On the other side, she shares a net worth of $2 million with her husband, Geneo Grissom. Initially, he signed 4 years of $2.89 million contracts with New England, where he played until 2018. Then he moved to Indianapolis Colts for the remaining 2018 season and then New Orleans Saints in 2019.  Overall, Geneo summoned $2,461,561 as his NFL career earning playing from 2015 to 2019.

Born on 14th June 1993, Geneo is the daughter of Gary and Jana Eastham. Grew up in Dallas, Texas, She finished her high schooling at Centennial High School in Frisco. After that, she enrolled at business school at the University of Oklahoma and subsequently worked in the fashion industry. In 2019, she graduated with Juris Doctor from Boston College Law School.